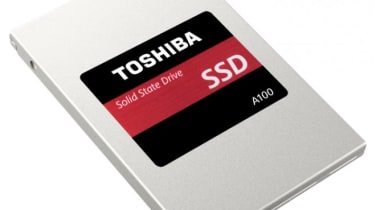 Toshiba has shrugged off a "painful" year with the launch of a new SSD and a dual charger and backup solution for smartphones.

The Japanese tech giant admitted massive accounting errors, which contributed to its first quarterly loss in years. It's since recovered its latest results marked a profit for the first time in six quarters but Toshiba faces a lawsuit from a local bank angry at losses from the accounting issues.

That's all the more reason to keep launching new products, said Arnaud Bonvarlet, general manager for Toshiba Europe Storage Peripherals Division, speaking ahead of the IFA tech show in Berlin. "In order to solve the issue, we must win the people's confidence [in Toshiba] developing products that help their day-to-day lives," he said.

The company's answer was two small launches, the A100 SSD, an entry-level class storage option to let people easily upgrade their PCs, and an as yet un-named product that acts as a smartphone charger and backup solution.

Imagine if you lost your phone, said Larry Martinez-Palomo, head of marketing, asking the assembled journalists to consider how distressing it would be to lose your photos and contacts.

Setting aside the fact most smartphones have built-in backup to the cloud, Toshiba has a solution: a charging device that not only powers up your phone but also backs up your images, video and contacts to a hard drive.

"Plug in to charge, but the difference is while charging it's making a backup of photos, videos and personal contacts," Martinez-Palomo said.

You can also use it to playback the content, or transfer it to a PC or new phone when upgrading hardware. Expected to arrive in early 2017, the device doesn't yet have a name or price, and Toshiba is still fiddling with the specs, so it's really more of a pre-launch than an actual product.

It will use a spinning hard drive rather than an SSD, and will be either 500GB or 1TB. Martinez-Palomo predicted the former, as that's plenty of space to back up multiple phones, and the device can indeed be used to store data from several different devices. It wasn't clear if each phone's data would be protected by a password or have other privacy features.

as it's essentially a hard drive with charging capabilities, he said the price would likely be comparable to a standard external hard drive, which can be had for less than 40.

Asked if a wireless option was in the pipeline, Martinez-Palomo said Toshiba was considering the idea and the "step up" version could indeed shed the cables, offering wireless charging and data transfer. At launch, it will only work with Android handsets, with an iPhone version to follow a few months later.

The use of spinning drives rather than SSD is an interesting choice, not only helping to keep the costs down but opening up an HDD new market small though it may be for HDDs, which Bonvarlet said was a shrinking market, with 50% of laptops now using SSDs instead.

He said Toshiba was "relaxed" about the market mix between HDDs and SSDs, as the company manufactures both and won't suffer if one outperforms the other, but predicted Nand Flash was the "future". Bonvarlet also predicted the Flash manufacturer market would consolidate further, following a similar trend of mergers and acquisitions as HDD makers over the past few years.

Toshiba said it currently held 30% of the Flash market and was investing in the shift from 2D to 3D designs. "We want to insist that despite the negative press we continue to invest and support our storage area," Bonvarlet said, adding that "demand for storage is endless".

Speaking of last year's "accounting malfunction", he said, "it was a very, very painful time for Toshiba." He added: "Nevertheless, if we focus on storage, last year was not such a bad year, unfortunately, it was overshadowed by bad news."