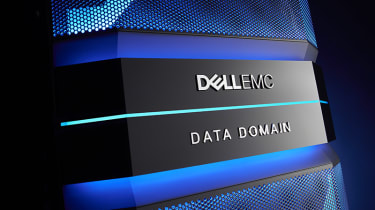 Unity has received three significant software updates. The first is CloudIQ, a cloud-based storage analytics platform that was previewed earlier this year and will be available before the end of the year. According to Dell EMC, it provides near real-time intelligence and predictive analytics to monitor and manage Unity storage, as well as providing health scores.

Meanwhile, the latest version of UnityIOE software introduces inline compression capabilities, which will increase efficiency thanks to features like thin provisioning, snapshots and "file system shrink". These features, plus the ability to compress block-based LUNs hosting in All-Flash pools, can save customers up to 70% in storage capacity costs.

Unity All-Flash also now provides up to 384TB storage in a 2U rack, thanks to new support for 15.36TB 3D NAND flash drives, which doubles the range's drive density, while the Unity 600(F) now has 10PB total usable capacity.

A new product has been added to the VMAX family, the VMAX 250F. Based on V-Brick architecture, VMAX 250F starts at 11TB and can scale up to 1PB effective capacity and over one million IOPS with, Dell EMC claims, sub-millisecond response times. The product offers up to 64 host ports and supports the industry's latest 7.6TB and 15TB enterprise flash dirves.

Four new Data Domain protection storage models are now available, the DD6300, DD6800, DD9300 and DD9800. All four are flash-enabled and provide "the ultimate in efficiency for tiering long-term retention data to the cloud".

This is in part facilitated by the deployment of the new Data Domain Cloud Tier software, which comes as part of the newly-released Data Domain OS 6, which also delivers advanced integration with Hadoop. The cloud software increases by 200% the volume of dat that cen be managed through a single appliance, with maximum logical of 150PB, and natively tiers de-duplicated data to public, private or hybrid clouds.

All three updated product lines are former EMC products, with the announcement being made exactly one year after Dell acquired EMC and one week before the companies' first joint conference, Dell EMC World, which kicks off on Tuesday next week. Features editor Jane McCallion will be reporting live from the event - click here for all the latest news as it happens.