Synology gets flashy with its new enterprise storage appliance 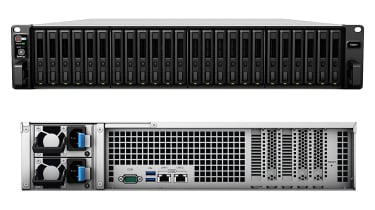 All-flash storage is the way to go if you want the best performance but although costs are dropping, many appliances still come with a hefty price premium. Synology aims to rock the boat with its FlashStation FS3017 which is designed to offer SMBs a powerful all-flash NAS/IP SAN storage solution at an affordable price.

This compact 2U chassis has 24 hot-swap SFF bays and offers plenty of choices as it supports high-performance SAS3 and lower-cost SATA III SSDs. It packs a big hardware package as it's endowed with dual 2.4GHz E5-2620 v3 Xeons and 64GB of ECC DDR4 which can be boosted massively to 512GB.

You can expand outside the box as the FS3017 supports two 12-bay RX1217sas or 24-bay RX2417sas disk shelves. The only drawback is you'll need Synology's dedicated FXC17 SAS3 expansion card which costs an unpleasantly steep 700. 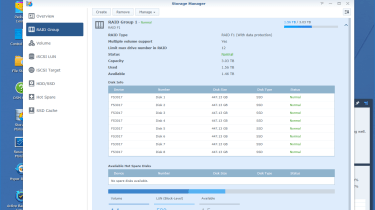 A new type of RAID

The FS3017 is well built with four sturdy hot-plug fans located under a separate panel in the upper surface. The main lid is easily removed for upgrade and maintenance manoeuvres although the storage HBA arrangement does take up a lot of space.

Synology has fitted three Avago SAS 9300-8i SAS3 HBAs and cabled each of their pairs of 4-port connectors to the drive backplane. We queried this with Synology and it advised us it took this route to avoid any potential performance bottlenecks resulting from using a single SAS3 HBA and SAS expander.

One feature that makes the FS3017 stand out is Synology's new RAID F1 array. SSDs have limited endurance based on the number of program/erase (P/E) cycles and RAID F1 is designed to avoid multiple, simultaneous SSD failures.

It's quite simple as it requires one SSD in an array to be nominated for sacrifice. More parity blocks are written to this SSD so it'll reach the end of its lifespan before the other array members and when you add a replacement drive, the array takes the next oldest for this role during the rebuild. 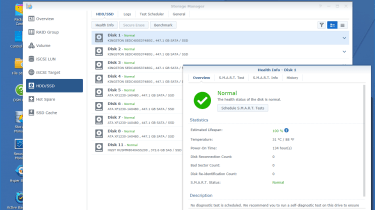 Mapping another share to a second server over a dedicated 10GbE link saw cumulative sequential read and write speeds ramp up to 18.4Gbps and 18.3Gbps. Cumulative throughput was equally impressive with Iometer recording 220,000 IOPS and 174,000 IOPS for random reads and writes.

IP SAN performance wasn't quite as good with one server logged on to a 500GB file-based target mustering sequential read and write speeds of 9.23Gbps and 8.8Gbps. A dual 10GbE MPIO link to our Lenovo server saw speeds increase to 14.9Gbps and 10.8Gbps.

IP SAN throughput was reasonable with the MPIO link delivering sequential read and write rates of 173,000 IOPS and 154,000 IOPS. Only a small drop was recorded for random operations with Iometer returning 170,000 IOPS and 150,000 IOPS. 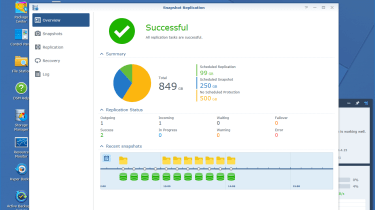 Synology's DSM software makes the FS3017 highly versatile allowing it to offer a fine range of NAS and IP SAN features. Choosing BTRFS for your volumes brings in NAS share and iSCSI LUN snapshots and replication.

The Snapshot Replication app manages these and allowed us to run snapshots on demand and schedule them at regular intervals. Snapshots can be replicated to BTRFS volumes on remote Synology appliances and the latest DSM 6.1 allows these to be sent to local volumes as well to provide extra on-site copies for quick restores.

Backup features don't get any better as the slick Hyper Backup app manages everything for you. It's easy to configure and provides wizards for 19 different tasks including backups to cloud providers such as Amazon, Microsoft Azure and Dropbox.

IP SAN LUN snapshots can only be replicated to remote destinations but these can now be managed using the Snapshot Replication app or VMware vCenter Site Recovery Manager. Active Backup is another handy app as it allowed us to secure data on Windows and Linux workstations without having to load an agent on them. 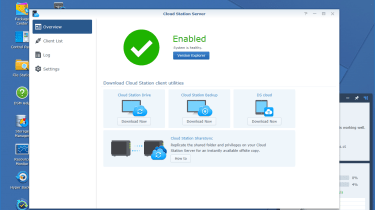 As a pure IP SAN appliance, the FS3017 is up against some stiff competition that deliver all-flash solutions at more competitive prices. HPE's Modular Storage Array 2042 for example, offers dual redundant controllers plus automated data tiering with prices for the 24-bay SFF model starting at around 7,000.

However, support for lower-cost SATA SSDs makes the FS3017 an appealing choice for SMBs on a tight budget. The appliance teams up a powerful hardware specification with good performance and Synology's DSM software offers an impressive range of NAS and IP SAN storage features.