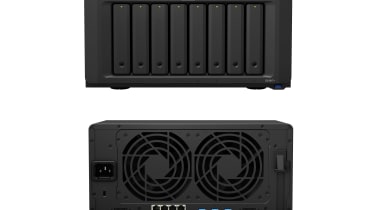 Synology's recent focus on its higher-end business NAS appliances has meant some of its SMB boxes have had to wait in line for a refresh. Its highly popular DS1815+ is overdue for an update as it's now well over two years old and the latest DS1817+ aims to remedy this.

Along with options for 10-Gigabit (10GbE) upgrades, the 8-bay DS1817+ is one of Synology's first appliances to support M.2 SSDs. A big disappointment is the lack of CPU upgrade as it still uses the same aging Atom C2538 SoC as its predecessor.

This CPU is over four years old and along with support for slower DDR3 memory, the entire Atom C2000 family is currently suffering the ignominy of being accused of bricking devices that use them. This is due to a clock signal component that degrades after prolonged heavy usage and stops the device from booting.

Synology has stated that it is aware of this, hasn't seen any abnormal error rates in its appliances that use these CPUs and has extended the warranty on older appliances (including the DS1815+) by an extra year. This shouldn't be an issue with the DS1817+ as two different sources from Synology confirmed to IT Pro that it has applied the suggested improvements to address this issue'. 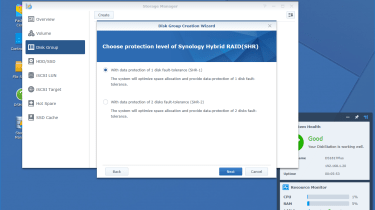 The DS1817+ uses the same sleek black chassis as the DS1815+ but with a number of modifications at the rear. The quad Gigabit, triple USB 3 and dual eSATA ports have been relocated to the base of the panel leaving room at the side for a single PCI-Express expansion slot.

The two SO-DIMM memory slots have been moved under the motherboard and are easily accessible behind a removable panel. The DS1817+ is offered with 2GB or 8GB of memory but if you want to upgrade to the maximum 16GB you'll need to write these off.

Another change that won't go down well with existing users is the DS1817+ only supports the new DX517 expansion units and is not listed as compatible with the older DX513 models. These new 5-bay units allow the drive count to be pushed to 18 and capacity using 10TB drives to a very usable 180TB. 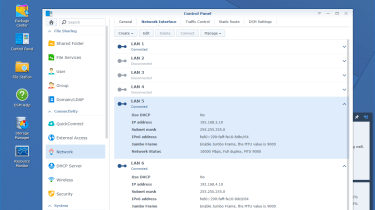 NAS performance is impressive as with the appliance hooked up over 10GbE to a Lenovo x3550 M5 Windows rack server, we watched Iometer record raw read and write rates of 9.2Gbits/sec and 4Gbits/sec for a mapped share. Real world speeds are also good with a 25GB drag and drop file copy returning read and write averages of 4.4Gbits/sec and 3.2Gbits/sec.

Backup speeds are on the low side as our 22.4GB folder with 10,500 files was secured at 1.5Gbps. The Atom's encryption performance was fair as copies of our 25GB test file using an encrypted share returned read and write speeds of 1.4Gbits/sec and 1.1Gbits/sec.

IP SAN speeds aren't so good with Iometer recording read and write rates of only 3.5Gbits/sec and 1.6Gbits/sec for a 500GB target. A dual-10GbE MPIO link didn't improve the picture much with speeds only increasing to 4.7Gbits/sec and 2Gbits/sec. 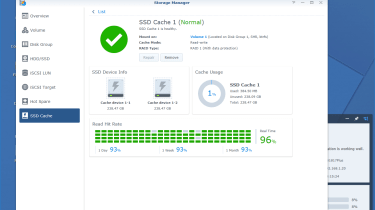 The optional M.2 SSD card can be used to add read or read/write caches for improved performance

The Hyper Backup app manages all your local, remote, Rysnc and cloud backups and has wizards for nineteen different types of backups. The Cloud Sync app works with 21 public providers and private clouds are yours for the taking with Synology's Cloud Station Server app on the case.

We tested the M2D17 expansion card with a pair of 256GB M.2 SSDs and after swapping out our 10GbE card, we used the Storage Manager app to create a mirrored read/write cache. It's easy to keep an eye on cache usage and the handy Advisor monitors volume usage and advises whether caching will be beneficial.

DSM also supports Seagate's IHM (IronWolf Health Management) feature and correctly detected our 10TB drives. This allowed us to run on-demand and scheduled health tests on our drives and check the results from Storage Manager. 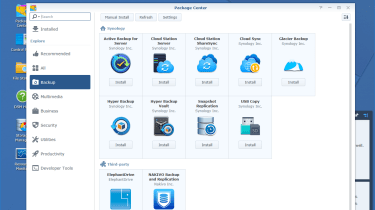 This eagerly anticipated refresh to the DS1815+ is a damp squib mainly due to the lack of CPU update. Had Synology gone for a more up-to-date Intel CPU, it would have easily steered clear of all the concerns about the Atom C2000 products.

The additional expansion slot does make the DS1817+ more versatile although you'll have to choose between 10GbE and the costly M.2 SSD adapter card. That said, it delivers good overall NAS performance and Synology's DSM 6.1 software is a standard setter for features.

Synology’s DS1817+ is good value for an 8-bay appliance and adds more versatility with 10GbE and M.2 SSD support but its reliance on an elderly Atom C2538 CPU is disappointing