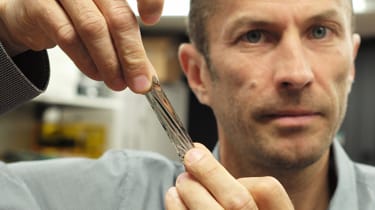 The modern data centre isn't just about All Flash, hybrid media and software-defined storage magnetic tape still has an important role to play as a stable, long-term storage medium. And, with a significant new breakthrough from IBM Research, it looks like it will continue to play a role for some time to come.

Scientists at the tech giant's research wing have managed to encode 201Gbits data per square inch of tape using a prototype medium from Sony Storage Media Solutions, resulting in 330TB of uncompressed data stored on cartridge so small you could hold it in your hand.

The prototype used in the experiment, a so-called sputtered magnetic tape, can hold 20 times as much data as any tape that's currently commercially available, IBM said. Sputtering is a common manufacturing technique that's used to create integrated circuits, and involves firing ions at a particular material in order to erode particles from that material, which then come into contact with and attach to another surface, creating a thin film on it.

IBM exploratory tape scientist Mark Lantz said: "This really demonstrates the potential to continue scaling tape technology, basically at historical rates of doubling the cartridge capacity every two years for at least the next 10 years."

Magnetic tape has been available as a storage medium for over 60 years and while newer media like spinning disks and, more recently, flash storage have come along, tape has always remained a viable choice. Although it's not suitable for 'hot' data, which needs to be easily and quickly accessible, it has long been used for 'cold' storage and backup where data doesn't need to be accessible at short notice, because it's more stable than platters or solid state in the long term.

This new breakthrough could extend the life of tape as a valid storage medium significantly and make it practical for the cloud era, too, IBM said.

Evangelos Eleftheriou said in a statement: "Tape has traditionally been used for video archives, backup files, replicas for disaster recovery and retention of information on-premise, but the industry is also expanding to off-premise applications in the cloud.

"While sputtered tape is expected to cost a little more to manufacture than current commercial tape, the potential for very high capacity will make the cost per terabyte very attractive, making this technology practical for cold storage in the cloud."