What are petabytes and just how big are they?

Enterprise storage is moving from tera to peta, but what do the terms mean? 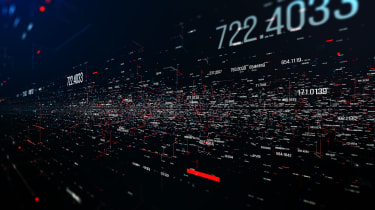 Petabytes are the unit of storage immediately above terabyte (which is itself the next up from a gigabyte).

At one quadrillion bytes, a petabyte is a lot of data. The most storage you're likely to see on a consumer-level computer, even at the high end, is a couple of terabytes a petabyte is 1,000 times that (see below for a full breakdown of different capacities).

However, in the realm of enterprise infrastructure, petabytes are far more commonplace.

HPE, Dell EMC and IBM are just some of the big names that produce petabyte-scale storage for use in data centres, often handling Big Data workloads. Such customers could be research institutions (for example, CERN) and universities, large financial institutions, or other sectors where large amounts of data are collected and analysed, often multiple times.

Cloud service providers will also have storage running into petabytes and beyond in their data centres, even though it's unlikely a single customer will be using anywhere near that amount of storage in one go.

Even if you're not in the market for a huge data centre just now, it's still worth familiarising yourself with the idea of petabyte storage, as your own computer could be sporting it sooner rather than later.

Consider that when floppy disks were first popularised in the mid 1970s, they typically only held 360KB data. By the time they were phased out in the late 90s, that had grown to 240MB.

Skipping forward a few decades, the latest HP EliteBook, Dell Latitude and iMac Pro have 16GB, 256GB and 1TB onboard storage respectively. Not long ago, these capacities in consumer devices even in standard enterprise data centres would have been unthinkable. And this is an area where progress marches ever forward, so don't be surprised to see this kind of capacity headed to laptops and desktops within the next 20 years.

Every measurement of storage is made up of bytes and each byte is made up of 8 bits, right at the bottom of the storage pile. From byte, we move up the size ladder, with kilobyte next in line, followed by megabyte, gigabyte, terabyte, petabyte, exabyte, and the unfathomably large zettabyte and yottabyte.

In order to convert from a lower metric to a higher, the rule is to multiply the number by 1,024 - so 1 terabyte is the same as 1,024 gigabytes.

That may sound strange if you've always been told that a kilobyte was a thousand bytes, and a megabyte a thousand kilobytes. The confusion is in part due to the use of binary in computers instead of decimal - 1,000 would be 1111101000 in binary, which isn't a convenient group size to use for a storage metric.

The use of 'kilo' is also confusing, given that a kilometre is 1,000 metres, not 1,024. In fact, in 1998 the International Electrotechnical Commission introduced new standardised prefixes, including "kibibytes" instead of kilobytes and "mebibytes" instead of megabytes... but they never quite caught on.

Here's a comparison between the various sizes: