HP dreams big with ‘The Machine’

The next big thing or just vapourware? 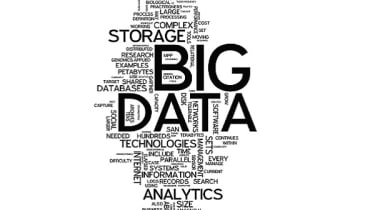 HP Labs revealed limited details about its main research project at its Discover event in Las Vegas this week.

Simply dubbed The Machine' - because it amalgamates the characteristics of PCs, workstations and servers into one fridge-sized design - this is the future. At least, this is what HP wants you to believe.

At its highest level, The Machine is aiming to solve the problems of exponential data growth. Today the public cloud uses as much energy as Japan, according to HP. As we continue to connect everyone and everything to the internet, data will increase exponentially and so will energy usage.

It all sounds bloomin' marvelous but is The Machine just a pipe dream?

HP is warning that existing infrastructure is unsustainable, and we'll get to the stage where we simply won't have the power to run it. Is The Machine the answer to all our big data-related problems?

Despite being in development for a mere 24 months, and not yet being part of HP's official roadmap, this hasn't stopped the firm outlining an ambitious vision.

Martin Fink, CTO and head of HP Labs, was on hand to generate buzz around the theoretical capabilities of The Machine.

"You could analyse one trillion CRM records in the blink of an eye. You could expand the bandwidth and storage of all your datacentres tenfold while slashing your energy consumption," he suggested.

"Your doctor could compare your symptoms and genomics with every other patient around the world to improve your health outcomes, instantly, without language barriers or privacy breaches."

It all sounds bloomin' marvelous but is The Machine just a pipe dream or can the sleeping Silicon Valley giant emerge from its slumber to make it a reality?

To make it work, HP has the unenviable task of re-architecting the way in which most modern computers are used.

All computers work on the same basic principle and architecture. To initiate an application, the CPU copies the program from the hard drive to the faster but volatile RAM. The problem is that CPUs have continued to increase in speed whereas memory has not kept up the pace. This has caused a bottleneck in performance - which - unnoticeable on regular laptops - can be a problem when it comes to high-performance computing.

HP has long claimed its ace-in-the-hole is it's Memristor', a technology it has been promising to commercialise for the last decade.

Short for memory resistor, the Memristor is 100 atoms wide - which is around half a million times smaller than a human hair. and is able to store information using ions. Crucially, it can retain data even when power is disconnected. This makes it energy efficiency and capable of replacing Flash, DRAM and hard drives.

HP's first challenge is to commercialise the memory technology. Developing a cost effective, reliable Memristor, which has the huge storage capacity for high-performance computing (we're talking Terabits) is not going to happen overnight. This in itself is likely to swallow up another decade of research.

But it's not as simple as just creating a new piece of hardware and chucking it into existing systems.

"Developing The Machine not only means building the hardware, but we're also investing in developing the software that will support itthe data algorithms, the operating systems, the security platform and the tools required  to manage millions of compute nodes from servers and datacentres to the smart sensors that will make up the internet of things," Fink acknowledged.

Despite HP CEO Meg Whitman giving Labs all the resources they need, it's going to be an uphill battle to commercialise The Machine.

Fink told BusinessWeek it could arrive as early as 2017 but this is beyond optimistic as HP has a habit of missing internal deadlines. If it can deliver anything commercial before the end of the decade, it would be miraculous.

Despite being the cornerstone of Silicon Valley, HP is visibly struggling. It lost out to Lenovo as the world's largest PC maker, has failed to make a dent in the mobile market and 50,000 jobs have fallen under the axe of Whitman since she took charge in 2011.

The belief radiating from HP Labs suggests there is mileage in this research, but this needs to be translated into a viable proposition.

HP needs The Machine to be more than vapourware. And the world will be a better place for it IF the firm can deliver.