Is Stella the solar powered car of the future? 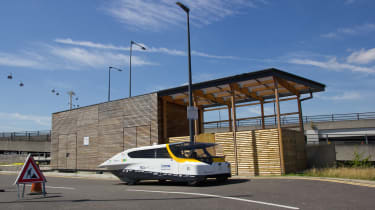 Designed by students at the Eindhoven University of Technology in Holland, Stella won the 2013 World Solar Challenge, a 3000km endurance test over six days.

Making her first appearance in the UK, we take a look at what makes her so special.

Aside from the unique design, Stella is powered by sunlight.

It's a misconception that a bright sunny day is needed to generate enough energy to drive a solar powered car. The opposite is true because clouds diffuse sunlight and rays of light are therefore spread across large surface areas. 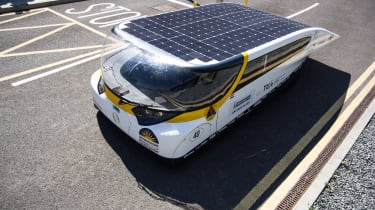 Based on an average of 70km per day, which is twice the average distance driven in Holland, Stella is able to produce more energy than she uses in 10 months of the year. For the average person, this represents a sustainable method of transport.

Stella has a range of up to 700km when solar power is in action and can travel up to 420km on battery power alone. However, exact range varies depending on the terrain, as hills require more energy to negotiate.

With NXP chips inside, Stella is able to communicate with other vehicles and infrastructure using Wi-Fi 802.11p. In a test bed setup, the car was able to warn the driver of incoming road-works, so they could switch lanes in advance. In principle this system will also allow the car to share information with other infrastructure such as traffic lights and also communicate with other cars to enhance collision detection. 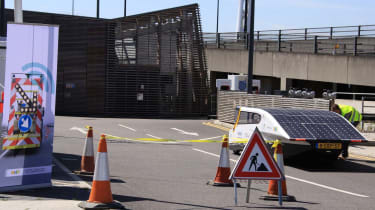 The internals are bare, which is expected as the car needs to be as light as possible. On average road cars have close to 100 buttons, and Stella keeps this to a minimum. The steering wheel is interesting as it provides haptic feedback when users are speeding, and the indicators are activated by pushing on the relevant sides of the steering wheel.

When Stella's battery is fully charged, energy from the solar panels can be used to charge other gadgets.

Stella has a low-centre of gravity so it feels like riding in a go-kart. The gull-wing doors give it a retro 80s look. Getting into the car is the most awkward part, as you have to bend down low to avoid smashing your head against the frame. 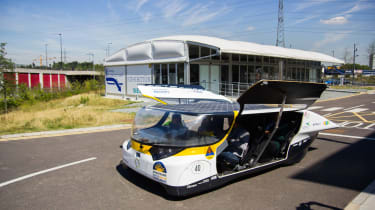 Conditions inside the car aren't as cramped as you'd think. Stella has a long chassis so it's got more legroom than most hatch backs.

One thing which can get irritating is the noise generated by moving parts when setting off from a stand-still. The noise quickly subsides and once you're moving at speed she is virtually silent. This is annoying with urban driving which is constantly stop-start.

Is Stella the future?

For now, Stella will remain as a prototype and a team at Eindhoven University will design another car from scratch. Due to her modular design, Stella will be used to test various add-ons relating to car-to-car communications and solar power.

The reality of Stella making it to mass production in this form is low at present but the design and technology principles are likely to trickle down to commercial vehicles.