The lowdown on Larry Ellison's salary, net worth, education and career history 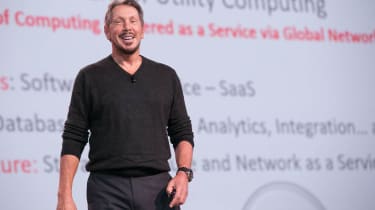 Larry Ellison is one of the most memorable men in tech and has been pivotal in driving forward database development over the last 30 years.

After recently releasing the helm on his beloved Oracle, we take a look at his career and achievements.

Education: Ellison left the University of Illinois at Urbana-Champaign after his second year. Attended University of Chicago for one term before moving to northern California.

Best known for: Being the founder of Oracle and the fifth richest person on the planet. Also a keen sailor, Ellison's Oracle Team USA won the 34th America's Cup in 2013 after trailing 8-1 to Emirates Team New Zealand.

Career history: In the 1970s, Ellison began working for Ampex. One of his projects included a database for the CIA he names Oracle.

In 1990, Oracle almost went bankrupt, in part as a result of a sales strategy caused by the booking of future license sales that failed to materialise. Two revenue restatements and a class action lawsuit against the firm almost sunk Oracle.

Despite this setback and intense competition from IBM, Informix (which IBM later acquired), Sybase and Microsoft, Oracle would dominate the database market in the 1990s. During this time. Ellison and Informix chief executive Phil White led an intense war between the two firms. This led to Informix's downfall and eventual absorption by IBM.

Today, Oracle's main competition comes from IBM (with its DB2) and Microsoft (SQL Server) in the database arena, although DB2 dominates the mainframe and SQL Server runs only on Windows.

In 2009, Oracle bought Sun Microsystems and with it control of popular open source database MySQL.

In 2014, Ellison announced he was stepping down as chief executive of Oracle handing the reins over to Mark Hurd and Safra Catz.