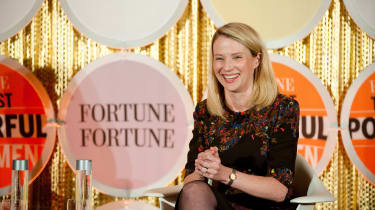 One of technology's most prominent women, Marissa Mayer has been responsible for pulling Yahoo back from the brink.

For years, Mayer was a high flyer in Google, being a major contributor to the search engine's look and feel. Once she had become Yahoo's chief executive, Mayer was one of only twenty women in charge of a Fortune 500 company.

Education: Stanford University (BSc and MSc Computer Science). For both degrees, her specialism was in artificial intelligence. In 2009, the Illinois Institute of Technology gave Mayer an honorary doctorate in recognition of her work in the field of search.

Best Known for: Being one of the most powerful women in technology

Career history: Mayer joined Google in 1999 as employee number 20 and was the firm's first female engineer.

She became known for her attention to detail while devloping and designing Google's search offerings.

Soon Mayer became a product manager and then director of Consumer Web products.

In 2005, she was promoted to vice president of Search Products and User Experience. she held key roles in a number of Google products including search, news, maps and Gmail.

She was vice president of Google Product Search until the end of 210 when then-CEO Eric Schmidt moved her onto head up Local, Maps and Location Services.

It then looked as if her career at Google stalled when others that joined google later than her were promoted past her. Activist shareholders in Yahoo, sought her out for a role heading up Yahoo, in a bid to turn the ailing company around.

In July 2012, Mater assumed the role of CEO, the fifth one in as many years.

In September 2013, Mayer was ranked number one by Fortune magazine's annual "40 under 40",  the first woman to do so.

Also in 2013, Mayer embarked on Yahoo's first acquisition with her in charge, buying Tumblr for $1.1 billion.

In November 2014, Yahoo announced plans to acquire BrightRoll for $640 millio in a bid to bolster its video ad efforts. That month, reports also started circulating suggesting some members of Yahoo's board wanted a merger with AOL and the new, combined, firm to be headed up by AOL CEO Tim Armstrong instead of Mayer.

In addition to Yahoo, Mayer also sits on the board of Jawbone and Walmart as well as several non-profit organisations.

Interesting fact: Mayer lives in a penthouse suite at the Four Seasons Hotel in San Francisco with her husband and their son.