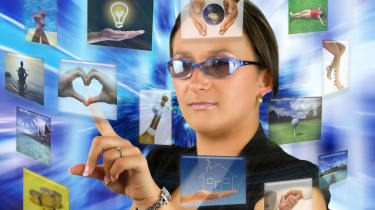 In the past year, virtual reality (VR) has become vogue for manufacturers, social networks and a whole host of other tech companies.

Facebook acquired VR leader Oculus, Sony announced Project Morpheus to run the technology alongside the PS4 games console, Google released its Cardboard DIY specs and Samsung is rumoured to be launching a product later this year.

Businesses are already trying to make the tech relevant to business and it's becoming apparent there's a demand in a range of sectors, including healthcare, the military, customer services and engineering - all of which are trialling VR in different capacities.

Although both use your surroundings overlaid with information, VR is a much more immersive experience, whereas augmented reality is often used for less demanding applications.

At the moment, VR is normally used by consumer applications such as gaming, while augmented reality is used more by businesses, she said.

McIntyre explained that augmented reality's early development came in the field for technicians and engineers when they were trying to fix something, whether they were carrying out a new procedure or were just stumped and needed instruction.

These initial scenarios saw AR used on a mobile device - either a smartphone or tablet as the viewfinder, with the operations superimposed over the scene in front of them.

There are numerous projects being set up by research organisations to evolve augmented reality into VR for commercial applications, taking it out of the consumer world and into the business world.

AppliedVR is one of these projects, set up by Jeremy Bailenson, director of Stanford University's Virtual Human Interaction Lab and the Los Angeles-based market research firm Lieberman Research Worldwide.

The aim of the project is to commercialise VR simulations with the biggest business potential and its first port of call is to investigate how VR can be used in the healthcare industry.

"Virtual reality transforms relationships that tend to be abstract to become visceral," Bailenson told Fortune Magazine. "Our research has shown that making this cause and effect relationship perceptual, as opposed to theoretical, changes consumer and other behaviors more than other interventions."

The initial study involved VR used to place children with chronic regional pain syndrome (CRPS) in virtual simulations to help divert their brains from pain. Experiments included putting children in virtual worlds where they could pop balloons to distract them from their suffering.