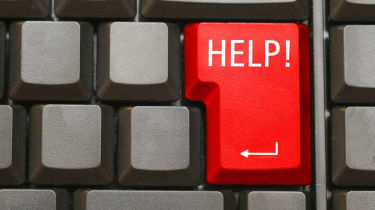 Working on a helpdesk isn't easy, and I should know. Before I entered the world of journalism, one of my first jobs was taking IT support calls for a major American bank's London office.

The main issue is that whatever the problem, the caller automatically treats you as if it is entirely your fault and and holds you personally responsible, even if it is the first call of the day and you have barely had time to park yourself behind your computer.

But aside from the psychological problems caused by working on a helpdesk, there are financial ones in as far as common helpdesk problems cost money. We've compiled a list of these issues and how you can make sure they bother the service desk team no more.

Possibly the most common complaint the helpdesk operator gets is when a user can't remember their password to access the network. The problem isn't so much resetting the password but getting the user to reset it themselves.

Nowadays, password resets are increasingly handled by automated systems, but a lack of user education can mean that some will still see a helpdesk call as the easiest and quickest way to sort out their problem.

If you can ensure users know about automated password reset systems, this can go a long way to cutting out a sizable number of calls to the helpdesk. Of course, if the user phones up to reset their Facebook password that's another matter...

The increasing popularity of bring-your-own-device (BYOD) has meant that lots of people now want to connect to the corporate network via the wireless network. Of course, this means having to provide details on what network to connect to and its password. Having a self-service portal accessed through another computer connected to the network can help users make sure they connect securely to the router and onwards to the organisation's infrastructure.

It is also handy to have this in place to help users that complain the wireless network is not working or keeps kicking them off. It could pinpoint problems such as overloaded routers in areas where a lot of users connect to them.

My PC is too slow/I need an upgrade

The cri de coeur of many a user is a computer that is slow. Sometimes this is because the user no longer has the latest and greatest machine, and they see their colleague's flashy new PC and envy sets in. A call to the helpdesk is made in the hope that they can automatically replace the machine instead of going through their line manager to request a new PC (which they are unlikely to get).

Of course, a slow PC may be down to a user running too many programmes at the same time, or a scheduled update or scan running in the background that eats up a lot of resources.

Another possiblity is that the user has picked up some malware. Whatever the reason, a lengthy investigation into the root cause could be necessary.

The printer is not working/I can't print

The number of times users have expected a printer to print despite it not being turned on is probably a figure not far short of a Googol. In the heat of the moment, a user will call up the helpdesk without checking first that the printer is on and whether it has enough toner and paper in the correct tray.

Another problem can be of the organisation's own making. Policy may be that access to a network printer has to be granted by the helpdesk. IT will then have to install drivers and make sure the user does indeed have access.

When everyone complains about the same thing

This is most likely to happen when there is a network outage. The helpdesk gets bombarded with calls from users and sometimes (actually a lot more than you would want) the user hasn't asked around to see if anyone else is experiencing the same problem. The reason people still call is probably down to a sense of responsibility to do so - which is admirable but actually quite annoying.

The old school way of dealing with this is to acknowledge the problem in the call and tell the user that IT is dealing with it, but this can be time-consuming. An automated message to warn of problems is a better way and will cut down the number of calls the helpdesk gets.

Users complain of a slow internet/Is the internet down?

The best way of getting a feigned response of "we're dealing with it" is for a user to call in asking why the internet is slow or even down (because apparently the WHOLE of the internet can go down according to some users).

A more simple explanation could be down to spyware and viruses on a user's computer. You'll have to check through with the user what sites they have visited previously and promise to clear up the mess they've made. You can then laugh at them when the phone call is over.