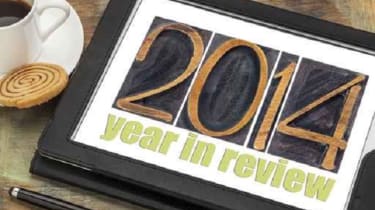 Blackberry After what can only be described as a disastrous 2013 for BlackBerry, the past 12 months have been considerably better for the Canadian smartphone maker.

While the previous year saw the firm hit with multi-million inventory charges, senior management changes, and an abortive attempt to acquire the firm by its largest shareholder, 2014 has seen it embark on a concerted push to reconnect with enterprise users to very positive effect.

This has resulted in the release of the eye-catching BlackBerry Passport, which has chalked up better-than expected sales, and lofty predictions about a return-to-growth for the firm in the not too distant future.

Mojang Even if hadn't been acquired by Microsoft, it's highly likely games developer Mojang would have made it on to our 2014 winners list, based on the continued popularity of its flagship offering Minecraft.

The game is said to have 100 million registered users, and saw its user base widen considerably this year with its release on the Playstation 4 and Xbox One consoles.

Microsoft coughed up $2.5 billion for Mojang earlier this year to safeguard the game's availability on Windows PCs and phones in the future, and - we assume - ensure Mojang's senior management enjoys a very nice Christmas.

John Linwood Former BBC CTO John Lihnwood had a tough 2013, which saw him sacked in July 2013 over the failure of the broadcaster's 98.4 million Digital Media Initiative.

Linwood maintained he was being used as a "scapegoat" and that he wasn't solely to blame for the project's demise, before pursuing legal action against his former employer.

In August, Linwood was vindicated after a tribunal hearing ruled that he had, in fact, been unfairly dismissed from from the corporation.

WhatsApp It's fair to say WhatsApp's 450 million-plus users were a little sceptical about how honourable Facebook's intentions were when news first broke that it was planning to buy the IM service in February.

With fears abounding that Facebook might opt to shut the service down and incorporate it into its own Messenger service, or even start charging users to send missives to each other, the WhatsApp user base wasn't happy.

In response, Facebook CEO Mark Zuckerberg promised users the service will operate as it always has done and continue to do so as a standalone entity.

And since the $22 billion deal was finally waved through by regulators in October 2014, he's shown no signs of backtracking on this.

Hackers 2014 has certainly been a busy one for the hacking community, with a series of high-profile attacks on the likes of Sony Pictures, iCloud and eBay causing massive disruption to their operations and - not to mention - reputations.

While vendors and industry types often predict cyber attacks will grow in complexity and sophistication as time goes on, these three provide solid evidence that this is a trend that's already occurring.

Lenovo Whoever is responsible for overseeing the PC maker's M&A activity is surely in line for a bonus this year, having helped the company successfully acquire Motorola Mobility from Google and IBM's X86 server unit.

Both prospective purchases were announced within a week of each other at the start of 2014, but - as these things often do - took several months to get signed off by regulators.

The upshot for Lenovo is that it's now in a position to take on the likes of Samsung and Apple in the smartphone market, having already taken the PC market by storm since its acquisition of IBM's Thinkpad business in 2005.

Meanwhile, its decision to purchase Big Blue's server business has been applauded by industry watchers, who have repeatedly advised Lenovo to expand into new areas as the downturn in the PC market continues to bite.

Graphene researchers Having been touted by researchers as a possible replacement for silicon chips, efforts to the commercialise the production of graphene have been slow to emerge.

To help speed things up, the UK government pledged 74 million in funding during the March 2014 Budget to aid the commercial development of the material.

In the meantime, research into what else the material can do has yielded results this year, with the discovery it could be used to boost the efficiency of fuel cell technologies, much to the delight of environmentalists.