Video selfies and the dangers of Apple Pay: 10 tech predictions for 2015 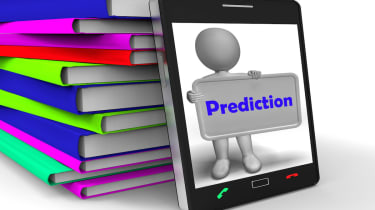 6. Containerisation will disrupt IT departments

According to 451 Research, 2014 saw an "explosion of activity" around Docker, the young upstart company specialising in containerisation.

The open-source technology of Docker enables sysadmins and developers to automatically deploy applications inside software containers, allowing those processes to run in isolation.

"[We] anticipate disruption in IT departments in 2015 as they start to use Docker," says 451 Research. "While containerisation technology has existed for years, Docker is a more modern, lightweight form that is widely viewed as a next-generation virtualization technology

"451 analysts believe Docker will be adopted by large enterprises to work alongside, as well as replace, traditional virtual machines because of its management and efficiency advantages.

"Docker has not yet achieved parity with traditional VMs in some critical areas, including orchestration and security, and a large number of vendors are rapidly addressing this."

Forrester believes the saturated public cloud infrastructure market will continue to be popular with customers looking to scale and benefit from economies of scale.

However, it predicts that while smaller infrastructure-as-a-service (IaaS) providers cannot compete, they will try to offer rival deployments in the private cloud.

"Offerings where the service is identical to the customer and operated uniformly, whether multitenant or single tenant, on-premises or in the provider's data centre are potentially attractive to many customers."

It sees this development as the only way customers with a requirement for on-premise infrastructure can go to the cloud.

"Microsoft will generate more margin dollars from cloud-based services than its traditional on-premises applications and Windows," the analyst house predicts. "Under Nadella's mandate, commercial product development teams are focused on driving innovation into the cloud versions of its properties first (on-premises second).

"And its sales engines are all rewarded for pushing as much cloud into each enterprise license agreement as possible."

8. Citizens will demand to own their own data

Consumers are becoming increasingly wary of how their data is used by companies, believes customer identity management platform Gigya.

Its own survey found 80 per cent of people have abandoned online registration pages because they did not like sharing the information they were being asked to share.

"Businesses must put transparency at the forefront of their data practices in 2015 and proactively address these privacy concerns by letting customers know upfront what data they want to collect, explaining how it will be used, and allowing them to easily opt in and out," the company warns.

While the tech industry awaits the launch of the Apple Watch and Google Glass (still) expectantly, no wearable has changed the way we live yet.

EMC's president of products, Jeremy Burton, predicts wearables will almost entirely die off in 2015, only surviving by serving niche markets.

"Apple fanatics worldwide expect wearables will go mainstream following the emergence of the Apple Watch, but I'm not so sure," he says.

"Let's face it, nobody under 35 wears a watch anymore they rely on their smartphones for everything. A lot of wearables will fail, with the guys wearing their Bluetooth ear piece all day propping up the market.

"Now, that said, not all wearable technology will end in abject failure. Standalone, niche wearables that shake up industries for the better such as FitBits or Jawbones that monitor vitals or health activity will continue to flourish and be incorporated into sports clothing, shoes and equipment. "

CIC's Howard broadly agrees. He says: "A lot of the heat comes out of wearables [in 2015]. There will be many more devices released but I don't see adoption sky-rocketing and I think vendors will start to temper their expectations.

"We're already seeing this with Google Glass. Wearables are more of an industry product than consumer. Unless someone discovers that killer app."

As firms wake up to the potential of big data, the role of data scientists has been a big topic of conversation in 2014.

And Hitachi Data Systems CTO for EMEA, Bob Plumridge, believes firms will start to hire them more and more as they discover just how much technical expertise is required to make sense of and use big data.

"They will also need to understand the business value of the data being generated and analysed in a specific sector," he adds.

"By 2020, all businesses will need their employees to have the technical skills we associate with a data scientist today. The problem we currently face is that there is a significant skills gap in the UK for workers with the advanced data skills to meet business needs."

This will be a tough challenge to solve in only five years and the development of UK tech talent must continue to be high on the agenda for both the government and businesses alike.

"The issue for IT teams [right now] is that they are going in data blind. Often data isn't classified at the point of creation, leaving businesses with no way of knowing whether they are looking at HR, sales or customer data.

"With the majority of data holding little to no value, the importance of classification is paramount to ensure businesses retain the crucial 20 per cent."