Our tech highlights of 2014 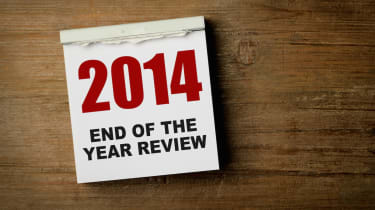 It's been a busy year in the tech world and often, we're so busy reporting on what has happened, we don't have much chance to take stock and say what we think about events.

Now we're nearing the end of 2014, things have quietened down and the team have had a chance to reflect on their highlights of the year.

Read on to see what the highlights of 2014 in tech were for the IT Pro team...

A number of tech developments have tickled my fancy this year. Perhaps most notably, 3D printing and all the possibilities entailed, the Chromecast which launched in the UK this year - and was high on my wish list to Santa - and continued discussion of drones filling the air with parcels.

However, the tech highlight for me has been - despite controversy elsewhere - the ease and simplicity of ordering a taxi through my Uber app. I was alerted to this late-night saviour by a friend and I was keen to try it for myself. It's a fun way to get home just choose your car and watch as it bobs towards you on the little map. Brilliant.

I'm finding it difficult to pick just one moment out of everything that happened this year. However, two particular things stand out. And not necessarily for positive reasons! HP's split took us all by shock and I'll be interested to see how this pans out in 2015 and beyond.

Microsoft's unveiling of Windows 10 also had us shocked. Largely because we all thought the software giant would be talking about Windows 9! Instead, no, Microsoft decided to do away with conventional numbering and head straight to the big one zero. I am intrigued as to the response this new OS will be met with by businesses and consumers alike in 2015...

While it feels a bit wrong to describe it as a "tech highlight", the fallout from the Sony Pictures hack has been a wonder to behold, and should serve as a timely reminder to IT departments and boards everywhere of just how damaging a data breach can be.

Seeing Stephen Hawking demonstrate the upgrades to his communication system was a great moment. His old system was 20 years old and in desperate need of a revamp. Intel worked with the professor to create the Assistive Context Aware Toolkit (ACAT) software.

The chipmaker is also planning to make the platform open source so vendors will be able to package the software and make better communication tools for the millions of people suffering from Quadriplegia and Motor Neurone Disease. Khidr Suleman, reviews & multimedia editor

From an IT user's perspective, the highlight of 2014 has to be the cloud pricing war between Google, Amazon and Microsoft. For those looking for cheaper infrastructure it is a godsend, helping cut costs and time-intensive resource maintenance for IT managers. What remains to be seen is whether those vendors can differentiate these offerings, which are currently essentially about renting storage space.

The Apple Watch really got people interested in and excited for wearable tech in a way that other companies had failed to ignite, with a focus on aesthetic and branding essentially unique to Apple.

Anticipation had been as high for the iWatch' as for anything new that Apple puts out into the market, but the company's approach immediately put the device head and shoulders above the rest. Collaboration with the fashion industry will likely be integral to the device's success in 2015.