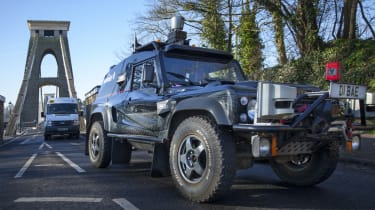 The government has given permission for the testing of driverless cars to begin on public roads, following a six-month review.

Bristol, Milton Keynes and Coventry will be among the first cities to trial the technology, after the Department for Transport (DfT) today approved real-world testing of self-driving vehicles.

The findings of the Driverless cars in the UK review will be followed up by a code of practice to be published this spring that will help govern how driverless car trials function amid real traffic.

Transport minister Claire Davies said: "I want Britain to be at the forefront of this exciting new development, to embrace a technology that could transform our roads and open up a brand new route for global investment.

"These are still early days but today is an important step. The trials present a fantastic opportunity for this country to take a lead internationally in the development of this new technology."

While the review made clear the existing legal and regulatory framework is suitable for testing driverless cars, it said a test driver must be present and responsible for safety.

Additionally, a full review of current legislation will take place by the summer of 2017.

This follows research last month from the Institute of the Motor Industry that half of MPs were against the development of driverless cars because of safety concerns.

However, the government will involve "industry stakeholders" in developing this spring's code of practice, which will be subject to periodic reviews to update it in accordance with technological developments.

It also said the code will be "quicker to establish, more flexible and less onerous for those wishing to engage in testing than the regulatory approach being followed in other countries".

America currently only has four states in which testing driverless cars is legal, while 15 states have rejected such proposals.

Business secretary Vince Cable said: "The government's industrial strategy is backing the automotive sector as it goes from strength to strength, we are giving business the confidence to invest over the long term and developing cutting-edge technology that will create high skilled jobs."

He predicted driverless cars will be a 900 billion industry by 2025, and highlighted four trials the government has funded to the tune of 19 million.

The Meridian shuttle will be tested in Greenwich today, and self-driving pods will be trialled in Milton Keynes.

Meanwhile, Bristol will take the BAE Wildcat out on the road in a trial expected to begin in early 2016.

Conducted by the Venturer consortium, a group of companies, universities as well as Bristol City Council, the trial will continue for three years, exploring the legal and insurance aspects of driverless cars as well as public reaction.

Lee Woodcock, Venturer project lead, said:  "This is an exciting time for the UK transport industry. Driverless vehicles will bring about many benefits including reduced congestion, safer roads and access to mobility.

"The Venturer consortium will look at what driverless vehicles could mean from a legal and insurance perspective as well as how these vehicles could impact on people's behaviour and how the public might accept this new technology."