Laws too slow to keep up with driverless cars, warns Commons

UK automative industry could get overtaken by other those in countries, says report 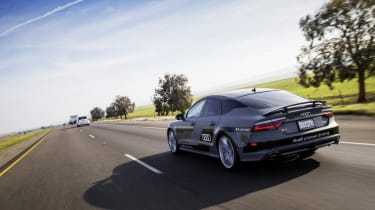 Legislation on driverless cars risks falling behind the technology's fast pace of change, according to the House of Commons Transport Committee.

Other countries will overtake the UK if lawmakers fails to keep up with the constant development of driverless cars, the committee warned in a report published today.

The Motoring of the Future report read: "There is a risk that technology will run ahead of government processes for ensuring safe motoring outcomes.

"A failure to update legislation in line with the development of new technology may disadvantage the UK automotive industry.

"The Department for Transport (DfT) must not allow UK legislation to fall behind both the pace of technological change and legislation in other countries."

It called on the DfT to do more now to create a strategy that ties together different pockets of autonomous car development around the UK, in order to bring more focus on safety to the burgeoning industry.

Trials in London's Greenwich, Bristol, Coventry and Milton Keynes are expected to continue for between 18 and 36 months.

However, the report said: "We are concerned that Innovate UK's inevitable focus on identifying commercial opportunities might lead to the trials not testing issues such as safety and how autonomous vehicles might be incorporated in UK traffic flows."

Testing driverless cars is now legal on UK roads, as long as a person is ready to take control of the car should intervention be required.

Despite this, safety and the ability of autonomous cars to react to other vehicles to people's concerns over the technology, according to a recent think-tank study that found one in three British drivers fear driverless cars.

The Commons committee said the tests should help improve public confidence when they see driverless cars on UK roads.

But it predicted that there will be a transition period in which both driverless and ordinary vehicles will occupy the same road space, before driverless technology is widely used.

Before this transition period can begin, the DfT must outline who is liable in any accidents, the committee explained.

Committe chair Louise Ellman MP told the BBC: "Who is liable? Is it the manufacturer of the vehicle, or the technology in it? Is it the driver?"

A spokesman for the DfT said: "Public safety is our first priority as we adapt to advances in motoring technology. We have a comprehensive approach to ensure the UK is at the cutting edge of developments.

"We are working closely with industry to progress driverless car technology, demonstrated by our recent announcement that the UK is uniquely positioned to lead the way in safely testing these vehicles on public roads.