He predicts AI computers will take over from humans, making the future world a very scary place 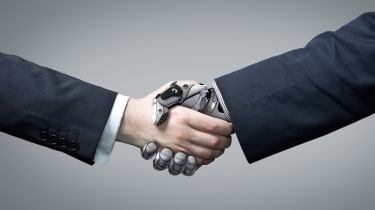 Apple co-founder Steve Wozniak said artificial intelligence is far from good and will create a world that is very scary for humans as they take over.

He explained that taking away the functions of humans will eradicate creativity as artificial intelligence replaces our intelligence and researchers should not strive for such an automated way.

Wozniak told the Australian Financial Review: "Like people including Stephen Hawking and Elon Musk have predicted, I agree that the future is scary and very bad for people. If we build these devices to take care of everything for us, eventually they'll think faster than us and they'll get rid of the slow humans to run companies more efficiently."

He continued: "When I got that thinking in my head about if I'm going to be treated in the future as a pet to these smart machines well I'm going to treat my own pet dog really nice."

In January, Stephen Hawking, Elon Musk and a number of Google researchers, Oxford and Cambridge professors and three co-founders of DeepMind, a start-up acquired by Google, signed a letter stating AI had its pitfalls and encouraged more research in the field, to ensure it doesn't have a negative impact on human lives.

The letter said: "Because of the great potential of AI, it is important to research how to reap its benefits while avoiding potential pitfalls. We recommend expanded research aimed at ensuring that increasingly capable AI systems are robust and beneficial: our AI systems must do what we want them to do."

However, there are a number of fans of AI research, including Google's Eric Schmidt who said claims AI research concerns were 'misguided'.