Things to see and do in Berlin

We explore what Berlin has to offer business travellers in the first of our City Guide series... 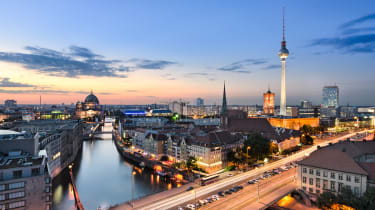 Berlin is one of the top European destinations for business because it has seen extensive regeneration since reunification in the 1980s. It's also a lot cheaper than many of the other European capitals, such as London and Madrid and its central location makes it simple to get to.

In fact, the city even hosts the Global Business Travel Association conference every year, so it's no surprise it's so easy to get around and communicate with like-minded business people in the area.

With a population of 3.3 million, Berlin has an employment rate of 89 per cent, mostly comprising qualified graduates, with an additional 51,000 trainees.

The major industries are science, technology and research with a third of the world's 50 largest companies all having an office in the city.

There's a booming start-up scene in Berlin too, with the Guardian touting the centre as the European Silicon Valley equivalent.

Berlin can be reached from most cities around Europe and beyond. There are two airports in Berlin - Schnefeld Airport and Tegel, although the latter will be closed in the coming years, replaced by Berlin Brandenburg Airport Willy Brandt.

Stansted is the cheapest option if you're travelling from London, with prices on Ryanair starting from 50 return. Budget airline Norwegian also travels to Berlin from Gatwick for around 70, while Heathrow offers flights with BA for around 70 in the low season, with plenty of notice.

Berlin is one city where you're spoilt for choice when it comes to public transport. Because the city is relatively small, a highly efficient underground train system (U-Bahn) runs below the surface, to all corners of the main metropolitan area. It has 143 stations across three zones, so you will easily find one that takes you very close to your destination. A one day ticket will cost 6.90 (5.40) for all three zones or 4.70 (3.67) for zones A and B only.

Berlin follows much of Europe with its tipping expectations. Amounts are between 5 and 10 per cent, although it's much more customary to round up a bill to whole Euros rather than leaving odd coins out for a tip.

If paying by credit card, it's best to tell the waiting staff you wish to add the tip onto your bill before paying, because it's not customary to pay by card and then leave out a cash tip.

You have two hours. Go!

The best way to see Berlin, like most cities, is on foot or jump on the hop on, hop off bus that takes you around all the sites of the city in around two hours.

One of the walks that takes in all the touristy sites starts at Alexanderplatz where you'll find the giant TV tower and takes you along to the Brandenburg Gate, the Reichstag with its amazing glass domed roof, down to Potsdamer Platz, Checkpoint Charlie and through the beautiful Tiergarden to Berlin Zoo.

You can decide to end your walk either at Berlin Zoo if you have time to spare, or if you're looking to spend some money, or grab a bite to eat, keep walking until you get to Kurfrstendamm, which is a wonderful shopping street with one of the biggest department stores in Germany and Europe (Kaufhaus des Westens, or KaDeWe).

Along the way, you'll see some fine examples of Berlin architecture - both old and new.

Berlin's history is one of the most immersive in Europe and although there's no denying that a lot of it is sad, Berliners have taken it upon themselves to make everyone feel welcome and are very proud of their city.

This whole experience is made much more enthralling if you find yourself in the city in the run-up to Christmas because the numerous Christmas markets have to be attended, complete with a mug of steaming Gluwhein spiked with rum. One word of warning though: you won't be heading to any meetings after drinking this potent stuff, so ensure it's an evening event rather than a lunch appointment!

Although much of Germany's culture fits alongside the Western World, there are a few pointers you should be aware of when meeting with German business contacts.

Punctuality is key in Germany, so ensure you let anyone you are meeting know you are running late as soon as you know you will be so.

Most business people opt for smart attire, especially if they are management, so dress appropriately and always ensure your German host is the first to remove their jacket as an act of respect.

In a restaurant, water is not free and if you ask for still water, it will usually be bottled. People don't commonly ask for tap water in Berlin, so don't be surprised if you get an odd look from your waiter or waitress if you ask for it.

It is seen as a sign of hospitality and good manners to invite guests to a meal and those that invite usually pay for the meal.

Although most people speak English in Germany, especially those you will likely come into contact with at business meetings, it is polite and expected that you try and communicate in German where you can. You will be able to find your way around much easier if you learn these key phrases before you head to Berlin.

Could I get the bill please? Die Rechnung, bitte (dee rek-noong bit-tuh)