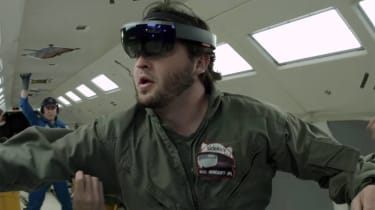 One small step for man, one giant flop for Microsoft: the company's HoloLens headset is remaining earthbound.

Two of company's prototype augmented reality deviceswere due to be sent to the International Space Station (ISS) last Sunday as part of a NASA programme to help train astronauts.

Elon Musk's SpaceX firm was scheduled to send the devices up as part of a resupply mission via one of its Falcon 9 rockets.

However, the unmanned rocket's launch was unsuccessful, detonating 19 seconds after lift-off.

Following an initial tweet from the company, Musk said: "Falcon 9 experienced a problem shortly before first stage shutdown. Will provide more info as soon as we review the data."

The cargo module, codenamed Dragon, is as yet unrecovered, and there are hopes that it remains intact.

The resupply is regarded as a low priority, as the ISS astronauts have enough supplies to last until September.

It is unknown whether a replacement set of HoloLens headsets will be sent up with the next rocket.

The first set of devices were primarily to be used to verify that the devices are fit for the ISS's purposes, with the hardware and software put through its paces.

Later in the year, a second pair of HoloLens headsets would join them, which would then be tested as part of the Sidekick programme.

The Sidekick project aims to "enable station crews with assistance when and where they need it", and functions in a similar way to the demos seen at the official launch of HoloLens.

Sidekick comprises two modes. Firstly, Remote Expert Mode, which uses Skype to provide ground operators with a real-time feed of what the astronaut is seeing.

They can then issue guidance and draw annotations on the HoloLens display, navigating crew members through complicated procedures that would previously have to be described remotely.

The second element is Procedure Mode, which overlays certain machinery and operations with "animated holographic illustrations" to provide explanations and instructions.

NASA hopes the project will help speed up training time for new crew members, as well as improving efficiency overall.

HoloLens was tested on NASA's Weightless Wonder C9 jet (also known as the 'Vomit Comet') ahead of last week's launch.

It is also hoped, however, that HoloLens's remote assistance capabilities will be an asset in future interstellar exploration efforts.

"This new technology could also empower future explorers requiring greater autonomy on the journey to Mars."

Project leaders hope that Hololens will be in full use aboard the ISS by the end of the year, but the announcement also raises interesting questions about the readiness of the device for consumer markets.

If Microsoft feels comfortable sending the product into space, it could be possible that HoloLens will be ready for a consumer launch not too long after Windows 10's July 29release.