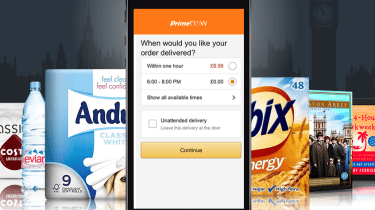 If you don't want to fork out the extra cash for a 60-minute shop, Prime Now also provides free deliveries within two hours, seven days a week, which could prove to be a real bonus for those who need items urgently and don't have time to step out of the office.

Prime Nowdeliveries can be scheduled between 8am and midnight, seven days a week, but isn't yet available around the whole of London - you can check whether it is available in your postcode yet here.

Before you put through that order for a new fridge, however, be aware that only everyday essentials are available to buy through the service, including batteries, chargers, USB cables, cereal, paper towels, books, soap and toys.

You can order any of these items using the Amazon Now app, which is available on both iOS and Android, via the Apple App Store, Amazon App Store and Google Play. 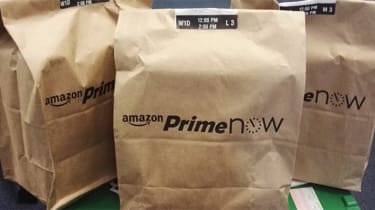 As an impulse shopper, the prospect of Prime Now delivering our hasty purchases before we've had time to regret them is a very exciting prospect.

With IT Pro'swork address served by the scheme, we put on our investigative hat and prepared to order as much random tat as possible.

Amazon's restrictions for Prime Now are rather specific, limiting items to 'everyday essentials' like bread, and iPhone chargers, but the orders have to be over 20 in order to qualify for the service.

We were not expecting to be able to order a telly - the deliveries are made by bike courier, after all - but putting a minimum spend on a service that's ostensibly just for ordering the odd bits and pieces seems counterintuitive.

In the end, we had to hunt for items to bump up the total, which resulted in the purchase of beef jerky, 72 Weetabixes and a USB hub. These weren't misplaced purchases (the beef jerky in particular was amazing), but they weren't what we were originally after.

This is where we run into another problem; Prime Now's selection is small at the moment. It does the basics well and essential non-perishable grocery items are there, as are basic electronics.

But the catch comes when you start looking for more unusual items, many of which are provided through Amazon's network of third-party resellers and thus are currently unavailable.

Once our order was bumped up over the minimum, we proceeded to the checkout, where I discovered the one-hour delivery, much touted by the service, was not available in my postcode. Instead, we had to choose from a list of two-hour delivery periods, the closest of which was between 12pm and 2pm, two hours away.

In the process of checking out, a few error messages bumped me back to the basket section, and then told us our basket had been emptied. Luckily, our order had already been processed by that time, but we have heard various reports of other users being affected and having orders being outright cancelled.

When our 12pm delivery window eventually rolled around, we were informed that our courier - Ross - was on his way. Excitingly, we also learned that we could track his progress through the app, which was a nice touch. Unfortunately, the map software Amazon uses isn't great, but it was serviceable enough to determine Ross's rough location.

Once dispatched, the delivery was astonishingly quick - the courier took just 23 minutes of the window to deliver our packages. Whether the service would be as prompt when using the one-hour option is a different matter, but on the basis of our experience, we'd feel pretty confident of a delivery arriving within 30 minutes.

As we included a bottle of cider in the order, we had to go down to sign for it, but non-alcoholic orders under a certain value can be simply dropped off if desired.

Unfortunately, the fact that we had to order 20 worth of stuff meant that we then had to heft three rather large parcels up to the fifth floor - another flaw in the awkward minimum-order policy.

Prime Now looks set to revolutionise shopping in the commercial laziness' sector, but it's got some serious hurdles to overcome first. As it currently stands, the selection of postcodes served is infuriatingly small, and of that already small number, a fair chunk of those seem ineligible for the flagship one-hour delivery service.

Another real issue is the 20 minimum spend. This introduction seems more surprising when takeaways only cost 10, and we're guessing Amazon has a bit more capital to play with than Pizza GoGo. A more sensible amount like 5 or 10 would almost certainly see the feature receive a lot more adoption. At the moment, it mainly seems useful for small but expensive luxury items like phones, tablets and other electronics.

The selection also needs to improve. One of Amazon's key strengths is the sheer amount and variety of its products, and the offering currently available through Prime Now do not do it justice. As the service expands, more products will doubtless be introduced, but for now, it feels a bit sparse compared to the full-fat version.

Overall, Amazon Prime Now shows fantastic promise. Modern consumers now live in an environment where they can get their music, movies, books, communications, pictures, and even their work delivered to them instantly wherever they are, and for a long time it's felt like shopping has been trailing behind.

Once its teething problems are sorted, Prime Now looks set to drag retail kicking and screaming into the 21stcentury.