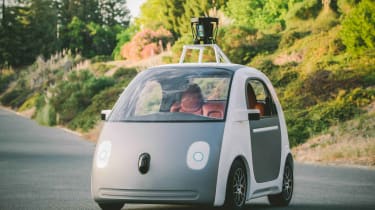 Google's first recorded injuries in a self-driving car have been chalked up to human error, with three employees treated for whiplash in hospital following the incident.

The collision occurred on 1 July at an intersection in Mountain View, California, and involved one of the company's Lexus models and another motorist.

Head of the tech giant's driverless car project, Chris Urmson, detailed the incident in a blog post this week, saying that in order to avoid getting stuck in the middle of the busy junction, the Google car stopped at the lights.

"After we'd stopped, a car slammed into the back of us at 17 mphand it hadn't braked at all," he added.

The three staff treated from minor whiplash were otherwise unhurt, and Urmson confirmed that "thankfully, everyone in both vehicles was okay".

He placed the blame on the other driver, and released a video illustrating the Google car's normal and natural driving.

The other car apparently did not slow down when approaching Google's vehicle, and Urmson said: "This certainly seems like the driver was distracted and not watching the road ahead."

Google has been quick to point out the programme's comparatively low number of crashes compared to regular cars just 14 since the project began in 2009.

Urmson has previously written about these statistics, claiming that in every recorded collision, the self-driving car was not the party at fault.

As in this instance, the majority of crashes were fender benders' at intersections, when human motorists rear-ended an autonomous vehicle.

According to Google, this is proof that it's on the right track. "The clear theme is human error and inattention. We'll take all this as a signal that we're starting to compare favorably with human drivers."