What will Apple launch at tonight's Special Event? 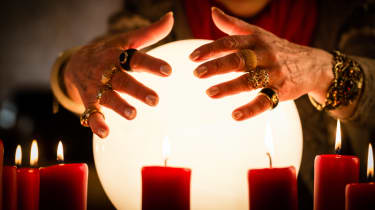 Rumours about what Apple will launch at tonight's Special Event have been circulating since... well, since the iPhone 6 launched, really.

Team IT Pro has been sifting through this endless stream of data to bring you the latest news and rumours (at least the likely ones) via our dedicated page, where we will be running a live blog tonight during the event.

But before Tim Cook takes to the stage at 6pm, we've put together our own thoughts on what he will and won't announce - and what we would most like to see (even if it might not make an appearance).

I'll eat my hat if we don't see an iPhone 6s. It'd be great if it's available next month. Around the 17th (my birthday!) would be ideal... Given that Tim Cook is speaking at Box's Boxworks conference later this month, I wouldn't be at all surprised if there was some kind of Apple/Box tie up mentioned.

I don't think we'll see an iPad Pro just yet. It would also make sense for Apple to have a variety of iPads to suit different budgets and use cases. I think this will happen, but it's unlikely to be the focus of the main event today.

I'd really love to see Apple do something cool but useful with Siri and IBM's Watson. Something that is really powerful and transformative and has real-world applications that will be beneficial to those most in need.The news is filled with the sad plights of people around the world and it frustrates me that we have so many tech innovators with so much to offer, yet we aren't focusing energy on solutions in those areas (or maybe people are, just behind the scenes).

The iPhone 6s will surely be unveiled, with its release date right around the corner. Rumours that Apple will discontinue the 5c do suggest another budget model, a 6c perhaps, could also be announced at the event tonight.

I don't think we'll see a new iPad, simply because no-one needs one, and iPads don't come with contracts that regularly expire the way iPhones do. However, saying all that, I would love an iPad Pro to land: the rumours of an enterprise-focused slab are building steam, and Apple's enterprise agreement with IBM to get more devices into businesses is ideally placed to push the device into execs' eager hands.

The launch of new iPhones are a given at this point, and it'll be interesting to see what Apple pulls out of its proverbial hat there. It'd be a shock if there wasn't a new Apple TV, too, with the recent news about original content and the fact it hasn't seen an update for years.

Rumours of the 12in iPad Pro have been circling for some time and, unless Apple decides to unveil this as its bonus launch, it seems unlikely we'll see it tonight.

Updates to the iPhone could be interesting, and I'm hoping to see the rumoured upgrade for the camera that supposedly enables users to capture 4K videos, as well as what Apple might so with Force Touch on the iPhone.

I think it's pretty obvious we're going to see the iPhone 6s and 6s Plus tonight, plus a new Apple TV set top box.

What I don't think we will see, however, is a new iPad. Why dominate just one news cycle when you can dominate two with a separate iPad-focused event? Especially if you want to emphasise that there's still plenty of life still left in the iPad and lots of demand for it?

I would like to see a smaller, 4in, iPhone 6c. Plenty of people, including myself, still want a smaller iPhone as they're easier to hold and use single-handedly. The iPhone 5c was the unsung, underappreciated hero of the iPhone range - attractive, sturdy and it fit the hand like a glove. Stick the latest processor and camera in it and I'd be happy as Larry.

Oh and a transporter that solves world hunger. In gold.

It's pretty much common knowledge that the iPhone 6 Plus will be landing tonight. It also looks like a new Apple TV could well be on the cards - and not before time. However, I've also got a feeling that Apple could launch an iPhone 6c variant, much as they did with the iPhone 5.

There have been rumours flying around recently that Apple is getting into the original programming game, much as Netflix and Amazon have. In my opinion, this is almost certainly balderdash, but even if they were, they're certainly not going to announce it tonight. The iPad Pro is also (sadly) unlikely to rear its head.

I'd quite like to see the announcement of the quasi-mythical Apple Car, if only to finally put the endless speculation to bed. Back in the realm of possibility, however, a fully-featured, more affordable iPhone 6c would probably top my wish list.

The iPhone 6s - like everyone else has said - is pretty much a given, plus at least one either smartphone, be it the 6c or the 6s plus. I also expect the iPhones to feature Force Touch displays - it's becoming an Apple device USP, so it makes sense to use it wherever possible (and reasonable). A better camera would also make sense, partly because it's become something of a necessity on smartphones these days and also because Apple has entered into a camera war with Samsung.

Siri is also going to have a massive role to play in whatever's launched tonight - she's been used to build anticipation among fans, and for anyone as eagle-eyed/obsessed as me (take your pick), you will notice the logo for the event includes a sine wave, which is often used to represent speech.

I am not convinced there will be a new iPad - while Apple has entered into various alliances to bring the device into the enterprise, overall sales are declining so bringing in a new range would be risky. And no, we won't be seeing an Apple Car. Seriously, just drop it.

I am excited to see what's going on with Siri. I'm pretty sure it won't live up to my fevered imagination and even if it did, that might not be a good thing, but we shall see. On the more practical side, I would really like to see a 4in iPhone 6c - the 5in+ ones just don't fit in my hand comfortably. Oh, and Taylor Swift.