The car manufacturer tested out a Lexus GS in Japan 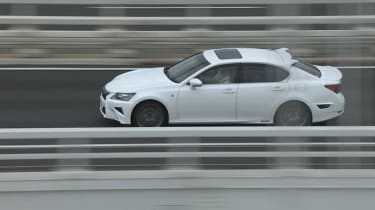 Toyota has confirmed it is testing driverless cars in Japan, announcing it used a modified version of its premium-brand Lexus GS on Tokyo's Shuto Expressway.

The car carried out a number of  manoeuvres, including changing lanes successfully and keeping its distance from other cars on the road.

The Lexus GS prototype integrates a number of external sensors to recognise any hazards nearby or in its line of sight and then reacts appropriately by adjusting the steering, accelerator and brakes in a natural way.

It also automatically selects which would be the best lane to use and how to get to its destination using the data fed back from the sensors, the location and final destination.

However, the current Lexus GS prototype can only be used on main roads because it's not as sophisticated as it would need to be in order to make operating independently, without a driver, safe.

Toyota is hoping to have launched other related projects into the mainstream by the time is hosts the Olympic Games in 2020.

The company joins a number of other car manufacturers and tech businesses currently testing driverless cars, including Google in the US and Ford and Jaguar Landrover, which jointly launched a four-city trial in the UK.

In July, the UK government launched a driverless vehicle research project to help boost the country's position in such technologies. The 20m initiative is being led by the Department for Transport and Department for Business, Innovation and Skills (BIS), which have jointly created the Centre for Connected and Autonomous Vehicles (C-CAV).

Business secretary Sajid Javid said at the launch of the programme: "To boost productivity, Britain will need to capitalise on new technologies like driverless vehicles, securing high skilled jobs for those who want to work hard and get on, and contributing to a more prosperous future for the whole of the country."