12.6 million adults do not have basic grasp of technology, a UK-wide skills map shows 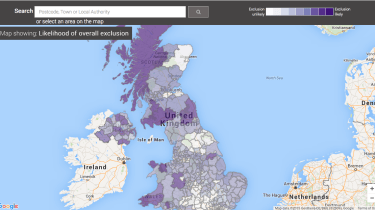 The organisation, whose chair is Baroness Martha Lane Fox, has created a Digital Exclusion Heatmap to show the distribution of digital skills across the UK combined with other known variables such as age, gender, income, health and broadband coverage.

It demonstrates that Greater London has the highest level of tech know-how, with 84 per cent of adults possessing the basics, with Scotland and East Anglia (both 81 per cent) following close behind.

Wales is at the other end of the scale with just 62 per cent of adults possessing basic digital skills, and this is also where broadband access is lowest.

With the study and its resulting tools, Go ON UK hopes to assist policy-makers and digital inclusion organisations across the UK to target the most disadvantaged areas.

Rachel Neaman, Go ON UK CEO, said: "The UK is experiencing a digital skills crisis. Digital competency is an essential skill for everyone and we believe that without urgent action the nation's lack of basic digital skills will continue to hold back economic growth, productivity and social mobility."

"The Go ON UK Digital Exclusion Heatmap is a wake-up call," added Ellen Helsper, associate professor at the London School of Economics and Political Science, who developed the map's methodology.

"It shows clearly how social and digital exclusion are closely related. The lack of basic digital skills and access in already disadvantaged areas is likely to lead to an increase in inequality of opportunity around the UK."

The map relies on data from a survey of more than 4,000 people across the UK, with additional information provided by agencies such as the Office for National Statistics, Northern Ireland Statistics and Research Agency, National Records of Scotland, Ofcom and HMRC.

The charity also launched the Go ON UK Local Beta today in association with Google in a bid to help SMBs whose employees lack a fundamental grasp of technology.

The online community toolkit and collaborative platform aims to support UK organisations, local councils, housing associations and skills training providers with internet access and other resources, as well as letting them share their experiences with one another.

"Where the GO ON UK Digital Exclusion Heatmap helps us identify the issues we face at a local level, Go ON Local Beta has been designed to support organisations that run digital skills activities for their communities to address those issues," Go ON UK's Neaman explained.

Eileen Naughton, MD of Google UK and Ireland, added: "Making the most of digital is good for businesses, charities and local communities, but developing the right skills and staying on top the latest technology isn't always easy.

"Through our Digital Garage programme, Google are helping organisations across the UK access the training they need. We're pleased to support Go ON Local Beta's introduction of its community tool kit, which will help individuals make the first steps towards becoming digitally savvy and more productive."