Commitment to SMBs reaffirmed in light of EMC acquisition as well 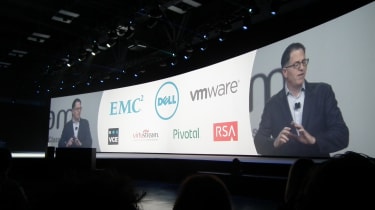 Michael Dell sounded a confident, somewhat defiant note today on his decision two years ago to take his company private, claiming it enables the business to take a more long-term, future-facing strategy then when it was a public business.

Dell famously wrested back control of his business, with the aid of Silverlake Partners, in 2013 after an attempt by activist investor Carl Icahn and allies to oust him.

According to Dell, the acquisition of EMC was largely enabled by the fact that Dell is now a private company.

After taking his firm off the stock market, Michael Dell said he "kept being asked if we would still do acquisitions. Well, go big or go home, baby!"

Dell added that, when the company was taken private, he described it as "the world's biggest start-up".

"When we take EMC private, wow - who knew how big a startup could be," he joked at Dell World 2015 in Austin, Texas.

From micro to mega

One of the main benefits of uniting Dell and EMC is that the combined company will cover businesses of all sizes, from the smallest SMB to the largest enterprise, added the CEO.

"EMC has an unmatched reputation with large enterprises. At Dell, we have unmatched strength in small and mid-market," he said.

Indeed, Michael Dell was at pains to say that the acquisition of EMC won't make Dell an enterprise-only focused company.

"We love small and mid-sized businesses," he said. "It's the fastest growing part of the [US] market, and we see the same trend across the world."