HP split is 'no silver bullet for Meg Whitman's woes' 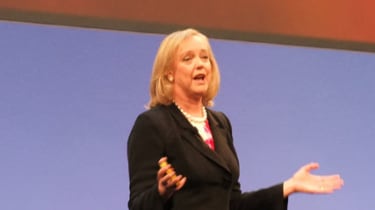 HP has officially split into two separate companies as of 1 November, marking the end of what has been a turbulent era for the 75-year-old company. But what does the future hold for these two firms?

For HPE, the split should help the firm focus on meeting the technology requirements of its enterprise customers and growing market share.

The company will concentrate on four areas - the move to hybrid infrastructure encompassing on-premise and cloud services, IT security, Big Data, and enterprise mobility. This company has Meg Whitman as president and CEO.

HP Inc gets to sell PCs and printers, in other words, the meat and potatoes of the old business. The company will be run by Dion Weisler as president and CEO. Each company will have around $50 billion in annual revenues.

But tastes have changed among HP's customers. Falling demand meant the old firm was struggling. In its most recent earnings report, around 25,000 to 30,000 jobs were to be slashed from the companies in the next three years.

According to a Gartner report published last year, the split "does nothing to address HP's core challenge of finding growth, or to directly address its shortcomings in cloud, software as a service (SaaS) and mobility".

The new companies would argue that splitting in two will make each nimbler and able to compete better. But the challenge for both is how to grow.

For HP Inc, it has a legacy business flogging PCs and printers, both markets past their prime. HPE is relying on greater automation and fewer employees as it tries to tell a narrative about a transformed company that has "defied business as usual".

It is the latter company that shows more promise but is less understood by the general public, selling servers, networking equipment and services to enterprise-level organisations.

Hardware will account for roughly half of HPE revenues going forward, while another 40 per cent is IT services outsourcing (from its EDS acquisition). Software and financial services account for around six per cent of revenue.

HPE has $5.5 billion in cash on the balance sheet, which may allow Whitman to make a number of strategic acquisitions, which she has hinted at.

Also, without the PC business dragging things down, HPE should see healthier earnings results. But other problems remain. While it sells many more servers than privately-run Dell, start-ups are less likely to buy servers and keener on purchasing cloud services from the likes of Amazon and Microsoft Azure, bypassing the need for any hardware to be owned by a customer.

HP has tried to run a cloud service to compete with AWS, but it announced that it will shut up shop on its Helion public cloud service and concentrate on hybrid models, enabling customers to build their own clouds that would work with AWS and Azure.

"We decided that it no longer made sense to compete in the public cloud portion," Whitman said in an interview with Re/code. "Our strategy is to take an open, multi-cloud approach to the marketplace."

But analysts believe HPE and HP Inc have a big task ahead convincing the market they remain relevant.

According to Anthony Miller, manager partner at analyst firm TechMarketView, it would be difficult to overestimate the effort that has gone into splitting HP in half since the announcement back in October 2014, and he believes the job is not yet complete.

He told IT Pro: "As recently as last week HP divested its networking security business, TippingPoint to Trend Micro and then announced its decision to exit the public cloud market in favour of partnering with Amazon Web Services and Microsoft. Undoubtedly there will be more fine tuning' to come."

"The split will sharpen client, competitor and investor focus on HPE as a pure-play' supplier to the enterprise market, a role which until now has arguably had been overshadowed by HP's PC and printing activities," he added.

"But from today the spotlight will be firmly trained on HPE as an independent business in its own right. There won't be, and nor should there need to be, anywhere to hide from its relentless glare," added Miller.

Clive Longbottom, service director at analyst firm Quocirca, said that while the split makes sense at one level, "splitting enterprise products away from more consumer-like ones, it really doesn't work like that".

"HP still sells a lot of PCs into the enterprise, and also has a strong foothold in the managed print services and large format printer markets, which are not consumer in the least," he said.

"For buyers, this creates a need to deal with two separate companies to get an end-to-end set of products - and many (who struggled with HP as the one company and the arcane way it deals with customers) may just walk away to Lenovo or Dell for their IT needs and source print-related turf from Xerox or Canon," warned Longbottom.

Longbottom added that HP has been a basket case for so long now, it has tried customer loyalty to its furthest reaches.

"If Meg doesn't make this work - and work fast, I believe that HP customers will start to walk, even with IBM and Dell being in the midst of their own chaos," Longbottom told IT Pro.Cust

"HP has not got a great history in making changes over the years (particularly around senior management).  I see little difference why this should be the silver bullet that Meg so sorely needs."