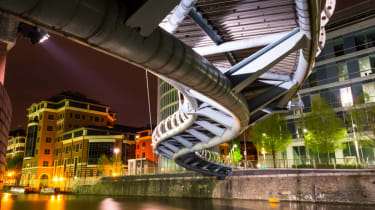 Bristol is fast becoming one of the UK's foremost tech clusters, with the council and university collaborating to make the city a testbed for innovation.

Their joint project, Bristol is Open, aims to invite enterprises and SMBs to take part in large-scale experiments that are enabled by a city-wide software-defined network.

This scheme has formed "a canopy of connectivity" in which tech firms can use Bristol as a place to research and innovate, according to Paul Wilson, MD of Bristol is Open.

He told IT Pro: "[Bristol is Open] opens up an innovation space which is huge, and people have a habit of filling the space. We don't know yet exactly what will fill the space, but we know that we're a nation of innovators and clever folk. We believe that space will be used competitively, so that's very exciting.

"One of our goals as a project would be to consolidate the city regions stake as an innovation hub with lots of small start-ups as well as global players finding this an easy place to come innovate."

With 40 post-doctorate academics from the University of Bristol leading the technology side of the venture, they are joined by Bristol City Council, focusing on areas such as assisted living for the elderly, driverless car experiments, and playable cities - Bristol's antidote to smart cities, allowing people to hold text conversations with lampposts and participate in city-wide games via their smartphones.

Value will come from global technology companies, including leading subscription company Zuora, interested in becoming long-term partners of the Bristol is Open project and pay-as-you-go customers, Wilson said, an option that will be made available from next summer.

Google and LinkedIn will join recruiter Randstad Technologies in hosting a Technologies for Success event in the city on 11 November to explore innovation from Bristol's leading tech entrepreneurs.

Ruth Jacobs, managing director of Randstad Technologies, said: "Bristol has grown into one of the most cutting-edge tech clusters in the UK. Not only does the city push the envelope with its environmentally-friendly initiatives, it's also at the forefront of the global smart cities movement, as well as being a major player in both the IT and robotics sectors. But even though Bristol technologies pack a punch, the city is still relatively unknown on the global arena."