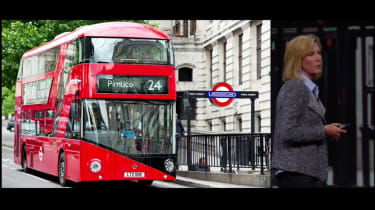 Transport for London (TfL) is trialling e-paper displays at four of its bus stops and plans to replace up to 19,000 shelters across the city if all goes according to plan.

The solar-powered displays show when buses are due to arrive on the existing stand, meaning Londoners are able to easily see when their next bus is coming. They will also display route information that can be controlled by passengers with the tap of a button, plus full timetables if those using the transport want to see more information about the service.

TfL's e-paper displays look like giant Kindles, but the benefits are much bigger than just showing information on time. Not only are they more disability-friendly, save space on stands and are intuitive to use, they also use less power than standard LED displays often seen on London's bus stands.

However, TfL hasn't revealed how much they will cost if the decision is made to implement the technology on all 19,000 bus stops in London.

"This is just an option. One of many ways we're looking at getting information out," Simon Reed, head of bus systems and technology at TfL told the BBC. "What we're investing in here is a trial for four stops to prove that the technology is viable and then really to work up what the costs of that would be network-wide or just in specific circumstances."

Vandalism in one concern Londoners will have about the technology, the BBC's technology Chris Foxx suggested, although Reed said if they work well, it's unlikely anyone will destroy the tech. "As long as the information is accurate and timely, Londoners find it useful and our rates of vandalism are actually very, very low," he said. "Something's useful, people value it, it doesn't get vandalised."