Our tech highlights of 2015 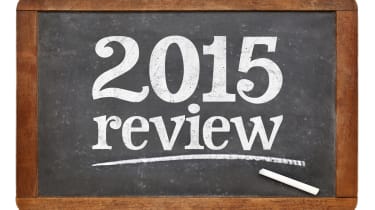 We're nearing the end of 2015 and the tech industry is having a little rest while it prepares for the busy 12 months 2016 is shaping up to be. Now's as good a time as any to take stock and look back on some of our favourite moments from the year gone by in tech.

Read on to see what the highlights of 2015 in tech were for the IT Pro team...

"My favourite tech this year on a work level is Slack it has been brilliant. It's enabled me to feel closer to my team and other departments as well as providing a useful overview of what everyone is up to.

"On a personal level I've enjoyed playing the CBeebies Playtime app with my daughter a wonderfully colourful and intuitive child (parent)-friendly app that has assisted her technical development for sure."

"It's not so much a tech highlight as something that just really stands out when I look back on the year gone by, but Google's Alphabet re-brand is up there. Not least because it was a complete shock to most of the industry and confused us completely!

"It will be interesting to watch what Alphabet does in 2016 in terms of existing companies under its umbrella and any new businesses it may well acquire."

"The government's decision to allow manufacturers to test driverless cars back in February was a huge step towards embracing a science fiction future here in the UK. There's a long road to travel before self-driving vehicles become ubiquitous, but cutting out the possibility of human error will mean safer journeys for everyone, and greener ones too, with cars better able to regulate their speeds and fuel consumption.

"Recent news that Google has held several meetings with the government about the technology shows the UK is trying to be at the forefront of this particular innovation."

"My highlight of the past year has to be the bitter on-going debate over mass surveillance and government-mandated backdoors into encrypted internet communications services.

"Terrorist atrocities have given new life to government demands on both sides of the Atlantic for backdoor access to the vital encryption standards that protect not only our messaging and voice services, but also e-commerce and perhaps even infrastructure. It's nothing short of astonishing when former high-ranking American spooks come out against encryption backdoors, while thinly-veiled government sock puppets parrot technically-ignorant nonsense and fear-mongering in the right-wing press. If this doesn't linger on to become a major issue in the 2016 US presidential elections, I'd be very surprised indeed."

"2015 has been a transformative year for big incumbents, with two contrasting stories dominating - the split of HP into HP inc and Hewlett Packard Enterprise (HPE), and Dell announcing it is to buy EMC.

"As someone who enjoys writing about business, these have been two very interesting narratives to follow; on the one hand, HPE has been extolling the virtues of being a focused company, while Dell talks about being able to offer customers all their solutions in one place. They disagree with each other vehemently, but it's quite possible they are both right - that their customers are asking for this particular strategy. I will be very interested to see how this pans out across 2016 and 2017 for both companies, though."

"It's been great to see companies like Apple, Facebook and Google embrace new technologies such as augmented reality and artificial intelligence, experimenting with it in fun and interesting ways like with Google's Deep Dream software. It removes a lot of the anxiety surrounding these things, which can only be a good thing moving forwards."

"One of the highlights of 2015 for me was an increasing focus on mobility. Devices like the Surface Pro 4 are blending the line between laptop and tablet, while the growing sophistication of cloud tools and productivity apps like Office 365 means that working from a tablet or smartphone finally feels like a viable option.

"Consumer cloud really came into its own this year, too, with the continued growth of services like Netflix and Spotify cementing the future of streaming. Both companies have conclusively proved this year that Media-as-a-Service is a winner for consumers."