Our tech predictions for 2016 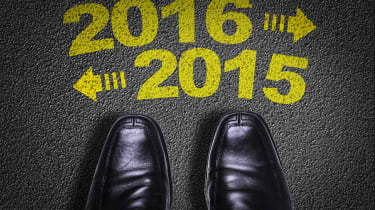 "I expect we'll see increased adoption of a number of tech innovations already out there. Homes will become even smarter and more readily operated' from our phones, offices will benefit from improved uptake of collaboration tools, and everyday wearable tech will be increasingly popular. None of this brand spanking new, but I think their general use will move from early adopter to mainstream.

"Slightly more outlandishly, I think robots will be big in 2016. It feels we're on the cusp of them talking over our lives already with drones and automated cars, so it's only a matter of time before they're doing what Tomorrow's World was predicting decades ago"

"Throughout 2015 we have seen numerous devastating data breaches, which have embarrassed previously reputable companies and destroyed customer trust in those firms. Hackers will still be a step ahead in 2016, but perhaps next year will mark the early days of recovery from businesses. This would largely be down to the EU's incoming General Data Protection Regulation (GDPR), which will introduce massive fines worth two per cent of a company's turnover for breaches. The risk of such severe punishment makes investing in better protective measures a much cheaper option than it has been so far.

"The GDPR will also cause chaos among companies reviewing their data protection policies, by changing the definitions of personal data and giving people more rights over their own data, including to discover what businesses know about them. Requirements to better protect customers' data, and understanding how the GDPR will change their interactions with customers, will create a substantial challenge for businesses."

"I'm expecting the Apple Watch 2 to launch in 2016 and will be very interested to see what it will bring. So far, I've held off buying Apple's wearable, even though I'm interested by it, as I'm hoping the Watch 2 will have better battery life and increased independence from the iPhone. If the features of Watch 2 are right, I may be prepared to open my wallet.

"I also predict there will be some major security and privacy stories in the year ahead. This a given - and I'm not just saying this because it's my patch! Cyber attacks are high-reward and low risk, so are an attractive MO for ne'er-do-wells and miscreants, who will continue to innovate in order to successfully hit the maximum victims possible. This, plus any real-world mass-scale attacks, will inevitably lead to misguided calls for weaker encryption and reduced privacy in the name of national security.

"While I don't agree with John McAfee that ISIS is likely to launch a devastating cyber attack against the west, the root server attack he has been referring to in interviews does very much look like a test run for something - I just think it's more likely an actual nation state. Will we see World War v3.0 in 2016? Probably not, but this is definitely an interesting development."

"I'm looking forward to seeing how innovation in the UK, particularly in IoT, begins to expand outside of London and into emerging smart cities across the UK.

"In general, there seems to have been a shift as to where the most exciting start-ups and innovations are coming from, and it'll be interesting to watch if that continues to diversify even further."

"2015 has been a great year for virtual reality, but all the really exciting stuff will be happening next year. The Oculus Rift, the HTC Vive and PlayStation VR are all launching in 2016, and within the first six months of the New Year, we'll be in the midst of a full-blown VR revolution.

"Games will be first off the mark for sure, but companies like HTC will be keen to ensure that the technology reaches all sectors, so expect to see in-store VR experiences cropping up more and more."