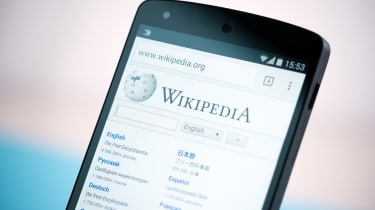 The money, donated by the estate of deceased software engineer Jim Pacha, will help the company pay its staff and keep the seventh biggest website in the world going. That said, it won't stop Wikipedia asking for donations from its users.

It's the first instalment in the newly formed Wikimedia Endowment, which will start with this initial $1 million and then aims to raise ten times the amount in the next decade. It's hoped the new method of raising funds will stop the company being affected by economic turmoil.

"We have a great fundraising model right now, but things on the internet change so it's not something we can count on forever," Lisa Gruwell, chief advancement officer for the Wikimedia Foundation said. "Wikipedia is a pretty rare thing, and the endowment is there to ensure this cultural treasure will never go away."

At the moment, Wikipedia is financed by user donations to avoid creating an advertising-led model and keep the site completely unbiased. US users are being asked to help raise an additional $30 million to contribute to future expenses of the site, while other worldwide visitors have seen similar messages popping up on their screens over the last few years.

However, Gruwell explained that this means the company has had to start exploring different routes to raise funds, because running such a large website has a lot of overheads.

"We are a fraction of the size of the others," Gruwell said. "If you compare how many people we have compared to someone like Amazon, we look pretty lean."

News of the funding comes on Wikipedia's - which was set up by Jimmy Wales and Larry Sanger on 15 January 2001. According to its own Wikipedoa entry, the site hit the 5,000,000 article milestone in November 2015.