Is a lack of self-belief pushing girls away from STEM? 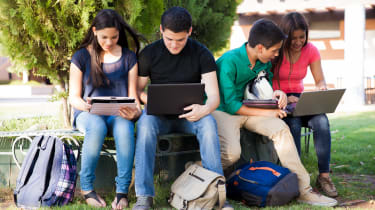 A lack of self-confidence may make girls question whether they are smart enough to study STEM subjects after GCSE.

This is according to a report entitled Tough Choices, that examines why A-level students are not taking up science and maths as much as they used to.

It comes after statistics from WISE published in early 2016 showed that five per cent fewer women studying at UK universities graduated with a STEM degree in 2015 compared with 2014, a drop of 6,000 people.

It also showed that men comprise the vast majority of STEM students at university, making up 86 per cent of engineering and technology students, and 83 per cent of computer science students.

However, when asked how they thought they had performed, girls rated themselves significantly lower while boys slightly overestimated themselves.

"The problem of lack of self-confidence and the 'difficult' image of STEM subjects is even more drastic among girls," the report said.

"When students lack confidence around STEM, they are already potentially disadvantaged in terms of what they might be able to achieve. When students are choosing their A-level subjects based on the grades they think they might get, rather than the utility of interest of the subject, they will gravitate towards the subjects they believe they can do better in."

Last year it was revealed that STEM subjects at A-level are becoming more gender-balanced, with chemistry seeing an almost fifty-fifty split and girls catching up with boys in physics and computing.

However, a report from the UK Commission for Employment and Skills in June 2015 highlighted the growing gender gap in the sector, with the number of women working in the digital fields falling by seven per cent between 2002 and 2012, from 33 per cent to 26 per cent.

Karen Price, director of the Tech Partnership network, said: "The news that female entrants to the digital sector are falling is very disappointing. We want to show women and girls that there are great opportunities in the digital sector, and that the rewards are great too."

Both boys and girls cited career relevance, their ability to do well, level of adult encouragement and interest and enjoyment as reasons not to study STEM subjects, while girls also said that the low appeal of science careers is also a contributing factor.

While boys and girls aged 10 and 11 are almost even (75 per cent for boys; 72 per cent for girls) in their engagement with STEM subjects, this rapidly declines as they get older.

At ages 12 and 13, the number of girls wishing to work in the sector drops to 54 per cent, while for boys it remains relatively steady at 71 per cent.

By age 18, just 19 per cent of girls remain engaged, while for boys it has dropped down to 33 per cent. According to the study, boys begin to drop out of STEM subjects as they approach their A-levels, while girls make their decision much earlier in secondary school.

Mobile operator O2 recently released findings that showed that almost half (47 per cent) of 11-year-olds to 18-year-olds surveyed believed that jobs in the tech sector are more suited to men, while women are better suited to being nurses (64 per cent), nannies (79 per cent) and hairdressers (63 per cent).

"It's worrying to see just how deeply engrained gender stereotypes still are, with many young people impacted by the archaic ideals that may have held back their parents or grandparents from rewarding roles," said Ann Pickering, O2's HR director. "A diverse workforce is a prerequisite to doing good business.

"Whilst it's right that businesses focus on the number of women in their boardrooms, our research shows the importance of focusing on the next generation too."

As well as a lack of self-confidence preventing female students from continuing into STEM subjects at A-level and beyond, it appears that there is also an issue of careers in science failing to appeal to girls on a wider scale.

The Tough Choices report said: "There appears to be an unconscious bias in homes, schools and society in general, as evidenced by girls' comments about parental advice, and their perception that they are given less encouragement than boys from their teachers. In addition, many STEM careers are currently not perceived as appealing to girls' broader ambitions."

Speaking about the report, Your Life Campaign chair Edwina Dunn said: "A big part of this fight will be confronting the gender stereotypes that still force more women away from STEM subjects. We must inspire young people both girls and boys with the opportunities that are unlocked through studying maths and physics."