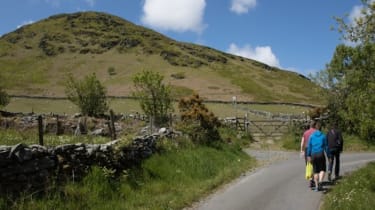 The Isle of Man could become the self-driving car capital of the world thanks to its unlikely status as a tech hub, and willingness of companies to make use of the land.

The small island, nestled in between Britain and Ireland, has a population of just 90,000 and a land mass no larger than Chicago, US.

Yet in recent years, the nation has become somewhat of a haven for digital industries cryptocurrencies flourish there, startups often set up on its sweeping hills, and it could soon become home to the world's first 5G network.

The reason for a Celtic-tech crossover is the government's openness to modernism in a starkly traditional landscape and a very lenient tax system that benefits business.

And, true to form, one of the tech world's biggest ambitions, automated vehicles, could soon call the Isle of Man its home. That's if transportation minister Phil Gawne has his way. He's working 16-hour days to see his plans progress.

Gawne is hoping to bring self-driving car manufacturers no prizes for guessing which to the Isle of Man. And it appears they want to play ball. The island may have the oldest continuous parliament in the world, apparently dating back 1,000 years, but it also wants its roads run by robots.

"We like also to be independent. This helps both those areas in terms of our international image and reputation."

Indeed, the Isle of Man may prove the ideal spot for such ventures. It's government is small and can pass legislation easily. Manufacturers are continually searching for places to trial self-driving cars in the real world, free from the shackles of bureaucracies.

It's an ideal combination.

"Things can be tried on an island that may not be practical in a city," David Alexander, an analyst at Navigant Research, explained.

"On the mainland there will always be someone who wants to go beyond the range of the trial and will then proclaim how useless autonomous cars are."

Of course none of this is set in stone. There'll always be expense perhaps out of the reach of the Isle of Man as well as legal challenges, the sensitivity of self-driving vehicles on public roads. And there are plenty more places with aspirations.

But the Isle of Man has a history of technological coups. Its pubs, for example, are full of Bitcoin cash machines, something not even seen in many parts of London. Its college focuses much of its resources on the future'.

Will the Isle of Man be the first nation in the world to see automated transit? One thing's for certain watch this space.