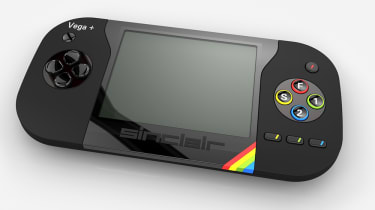 The handheld version of Sinclair's classic console has now collected 300,000 - triple the original goal - in less than three weeks.

This is more than the total sum raised by the redesigned Spectrum launched last year in its entire two-month campaign, and follows the news that the Vega+ met its initial target of 100,000 in under three days.

With a further three weeks to go until the Vega+ closes its funding drive, the handheld ZX Spectrum could be set to rake in even more backers - one of whom could be Raspberry Pi founder Eben Upton, who told IT Pro he wants to get his hands on it.

Sir Clive built the very first Sinclair ZX Spectrum in 1982, as a computer that many used to play videogames on, and he has re-released it on the back of surging interest in retro gaming inspired by devices like the Raspberry Pi.

With a month still to go, the rebooted 80s classic console has collected 158,973 from 1,487 backers on the crowdfunding site, meaning it will go into production in late summer 2016.

An update from Retro Computers, the producers of the new device, on the campaign page, read: "A massive massive thank you to everyone who has supported us so far, we cannot believe we have hit the 100,000+ mark already!

"We are taking on-board all your comments and will come back to you after the weekend with what we have managed to achieve with the specification of the Vega+, and what we are aiming to achieve further before physical launch!"

Sir Clive first built the Sinclair ZX Spectrum in 1982 as a computer designed for videogames, and a booming interest in retro gaming inspired by devices like the Raspberry Pi led him to re-release it last year as the Vega, which achieved 150 per cent of its funding goal in less than three days.

However, the new model has beaten that record by achieving the 100,000 goal in just two days, and will feature 1,000 pre-loaded original 80s Spectrum game titles, and support 14,000 more via MicroSD card, when it is released.

Sir Clive said: "The present surge of interest in retro products inspired me to plan the Vega+ as a handy games console which can be played anywhere."

They were able to play games on the computer, but also write and play their own games. 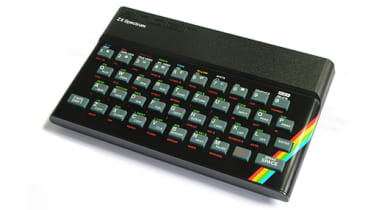 Speaking about the success of the original device (pictured above), Sir Clive said "it was adaptable, approachable, very easy to program, and simple to use".

A classic 1980s computer, the Sinclair ZX Spectrum, could be reborn as a handheld device - the ZX Spectrum Vega+.

A resurgence of interest in retro computing, fuelled by devices such as the Raspberry Pi, has spurred the team behind the original ZX Spectrum to recreate the device as a portable console.

Complete with an LCD screen and Gameboy-style input buttons, the Vega+ aims to repackage the Spectrum's classic games into a portable format. It can also be connected to a TV for big-screen gaming.

The device will come pre-loaded with 1,000 of the console's original titles, with support for its full catalogue of over 14,000 games via MicroSD card.

Sir Clive Sinclair, the creator of the original device, is currently holding a crowdfunding campaign on Indeigogo for the Vega+, in order to raise the 100,000 necessary for a full production run, with the device itself retailing for around 100 if the funding goal is met.

The new handheld comes after last year's Vega, which was a re-released Spectrum designed specifically to run games, achieved 150 per cent of its funding goal on Indiegogo.

Created by Sir Clive in 1982, the original ZX Spectrum was one of the very first home computers and achieved massive popularity.

A large part of the Spectrum's appeal was the fact that it could play games, as well as performing standard computing tasks. Not only that, but the fact that it was an open system meant that users were free to write their own games for it.

The Spectrum quickly kickstarted a hobby-computing boom, with a slew of specialist magazines dedicated to helping novice programmers.

This resurgence in home coding was credited with having a large hand in starting the modern games industry, but it is currently unknown whether the Vega will support user programming in the same way.