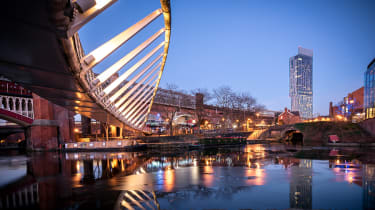 It would be "ludicrous" for Tech North to be accountable to its London counterpart, a Manchester start-up has said after reports suggested a budget power struggle was behind the departure of three high-level executives.

Community engagement and partnerships manager Paul Lancaster and head of skills and talent Coral Grainger will both leave Tech North, which is responsible for promoting start-ups in the seven Northern cities, after opting not to renew their respective contracts after April.

This comes after the resignation of the organisation's head, Claire Braithwaite, earlier this year.

Tech City Insider claimed that Braithwaite left after an argument with Tech City UK, the government quango responsible for promoting start-up scenes across the UK, over who controlled Tech North's budget.

"If it's true, as we're hearing, that the funding for Tech North is being controlled centrally by London then that indicates that there's clearly no trust in the North of England to manage itself," he said. "It's ludicrous that a body like this should have to be accountable to a London-centric narrative.

"Following the reports, my suggestion is 'keep your money and we will do it on our own'! We've been getting on with it in the North for the past 16 years or more, and have been doing an extraordinary job. Whilst the investment would no doubt be a boost to the community, should it be controlled and regulated in London? I certainly don't think so."

This week, Tech City Insider said a leaked internal email has confirmed that Tech City UK plans to incorporate Tech North's budget into a single budget and delivery plan for both organisations.

Tech North, set up to promote start-ups in Hull, Leeds, Liverpool, Manchester, Newcastle, Sheffield and Sunderland, has received criticism before, notably from Labour MP Chukka Umunna, who said the reality fell short of government rhetoric around the scheme.

But Jones added that Tech North could still influence the Northern start-up scenes in a positive way.

"Regardless of how this situation has come about we have to take the opportunity to focus the spotlight on technology and digital in the North," he said. "Tech North has a huge role to play and has done incredible work up to this point, but we do need to ensure that it's run in the North and by the North."

A spokesperson for Tech North told IT Pro: "Coral and Paul have recently informed us that they will not be renewing their current contracts. Coral is leaving at the end of February and plans to return to her company, which connects businesses with talent and educators. Paul is leaving at the end of March and is looking to set up his own business focused on the North East.

"Both have made huge contributions to the early successes of Tech North and we wish them well in the future."

In a blog post announcing his departure, Lancaster acknowledged some of the "sensational headlines" that have emerged in recent months, but maintains that he is leaving on positive terms and will remain involved with Tech North.

"It's fair to say there were a few sceptics in the beginning who either saw us as a threat to what they were doing or didn't see the need for another government body loosely linked to the 'Northern Powerhouse'," he said.

"However, we soon won people over when they saw how genuinely committed and passionate we all were.

Back in January, Claire Braithwaite made the decision to step down as head of Tech North, and has since become tech advisor for the Manchester Growth Company.

Upon leaving the organisation, she said: I'm very proud to have been at the forefront of the launch of Tech North, which is a vital initiative to ensure the continuing development of the tech ecosystem across the North of England."