Government to invest £167m into science and engineering PhDs

The money will support PhD students, while another £37m will boost quantum research 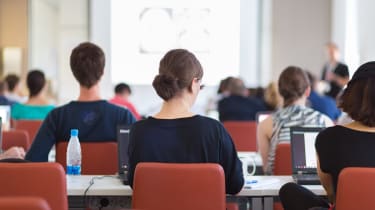 The government is pouring 167 million into engineering and physical sciences PhDs, as well as investing in more research into quantum technologies.

The Doctoral Training Partnerships fund will be awarded to 40 universities, benefitting around 2,000 PhD students studying physical sciences or engineering. The aim is for these universities to be better able to develop new innovations, later leveraging funding from UK business.

A further 37 million will be invested in the UK's National Quantum Technologies Programme, boosting work already being done in the sector including research into more accurate brain-scanning, earlier diagnosis of Alzheimer's and more powerful computers.

Jo Johnson, universities and science minister at the University of Oxford's Networked Quantum Information Technologies Hub, said: "We are committed to securing the UK's position as a world leader in science and innovation.

"The government is ensuring major new discoveries happen here, such as the creation of super-powerful quantum computers that scientists are working on in Oxford.

"This new funding builds on our protection for science spending by supporting research in our world-leading universities and helping to train the science leaders of tomorrow."

The UK government has invested a record 6.9 billion into science labs and equipment up to 2021, as well as committing to the protection of the science budget of 4.7 billion a year.

"Quantum technologies promise to revolutionise the way we live our lives," said professor Louise Richardson, vice-chancellor of the University of Oxford, where the announcement was made. "At Oxford we stand at the forefront of this revolution through our world-class research and training programmes.

"It is a pleasure to welcome the minister to Oxford to announce support for this key research area, as well as sizeable funding for doctoral places in physics and engineering that will help us continue to train the leading scientists of the future."