George Osborne wants to trial autonomous lorries in the UK

Convoys of autonomous lorries could be coming to the UK 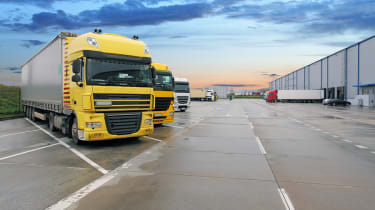 Autonomous technology is about to receive a boost from an unlikely source: George Osborne. According to a report from The Times, a new trial of driverless lorries will be announced in a speech by the chancellor next week, and it should happen before the end of the year.

The trial should see groups of up to ten computer-controlled lorries travelling in tight formations on a quiet stretch of the M6 near Carlisle, and it's all part of a plan to speed up deliveries and cut congestion on UK roads.

A Department for Transport spokesman told the BBC: "New technology has the potential to bring major improvements to journeys and the UK is in a unique position to lead the way for the testing of connected and driverless vehicles.

"We are planning trials of HGV platoons - which enable vehicles to move in a group so they use less fuel - and will be in a position to say more in due course."

Although we're all waiting for autonomous cars, it's likely autonomous lorries will be on our roads first - and they're actually the ideal vehicle for autonomous driving. They're on the motorway for large amounts of time, and their drivers can also suffer from concentration fatigue as a result. Driverless trucks were trialled by Daimler on German roads in October last year, and there are already plans to test similar tracks in Nevada. However, it's not yet known which lorry manufacturer the UK trial will use.