Google has received 77 million copyright removal requests in the past month, more than double the 34 million it received the same time last year.

Requests for the search giant to remove URLs that allegedly infringe copyright from its search results hit a record high of 21 million last week, compared to just 9.5 million in the corresponding week of 2015.

Google's transparency report is a partial record of the DMCA takedown requests it has received via its web submissions form. The data excludes other Google-owned services, such as YouTube and Blogger.

Requests for removal are made most frequently by copyright holders and reporting agencies that monitor the web on their behalf, and have shot up since Google started reporting takedown requests in July 2011. That year, it received less then a million requests to pull URLs. 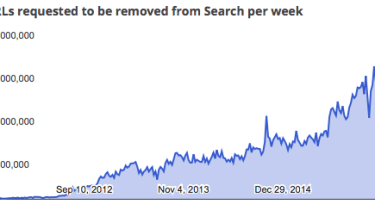 In a submission to the US Intellectual Property Enforcement Coordinator in October, Google said that the unrelenting surge in removal demands does not influence its takedown speeds.

Furthermore, the company has not complied with recommendations by the US government for "whole-site" removals, insisting that copyright holders continue to report individual infringing URLs.

Google argues that the removal of entire domains would lead to greater censorship.

New regulation and changes to law in the EU, such as the Privacy Shield deal, mean rights holders may yet turn the pressure up on Google further still.