Google Glass enterprise edition goes up for sale on eBay

Unreleased headset selling for over $7,000 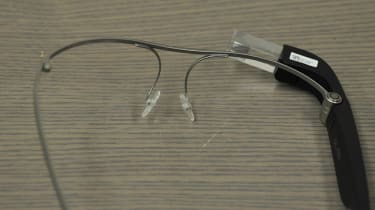 An enterprise version of the Google Glass headset has been found for sale on eBay.

A San Francisco pawn shop put the device up for auction on the site, after buying it from an unnamed individual.

At time of writing, the auction had already reached over $7,000, with over two and a half days left on the clock.

Dicovered by Google+ user Cavin Kabe, the listing is the first time anyone has seen the device in the wild, after an Federal Communications Commission filing revealed its existence last year.

The heads-up-display marks the second generation of the technology and follows the earlier 'Explorer' edition, although it was never officially released.

The device is a spruced-up version of the previous headset, geared towards enterprise use within key vertical markets.

The main change is that it now has built-in hinges, allowing it to be folded up like standard glasses.

Also evident from images attached to the eBay listing is a new proprietary charging port, which bears a striking similarity to Apple's MagSafe MacBook charger.

Rumours also suggest that further alterations include a larger display, water resistance and support for 5GHz Wi-Fi. Google has also included an LED to indicate when the device is filming.

A fully-fledged consumer release appears to be unlikely, after Google canned the Explorer edition of Glass.

As for how this device ended up in the hands of a pawn shop, it is possible that it was a unit used for internal testing, somehow smuggled out.

Development on Google Glass appears to be ongoing, with Nest's Tony Fadell currently heading up the project.

Image credit: A to Z Pawnbrokers