When you play the game of big data, you win or you die 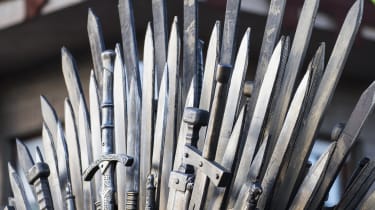 HBO's Game of Thrones is notorious for killing off its major characters in various grisly ways, but it is often impossible to predict who will die next - unless you're an AI algorithm, it seems.

Researchers at the Technical University of Munich (TUM) have put together a set of machine learning algorithms, which trawl through data from the books and TV show in order to predict who will be next for the chop.

The team have set up a website - A Song of Ice and Data - where you can look over the list of most likely deaths, as well as looking at more in-depth statistics, such as whether men, women, lords or lowborn are more likely to die.

The top two entries might not come as a surprise to many; toddler-king Tommen Baratheon has a 97 per cent probability of croaking, while there's a 96 per cent chance that his quasi-uncle Stannis Baratheon will be off to meet the Lord of Light this season.

Some predictions are more surprising. TUM's algorithms suggest that Daenarys Targaryen, for example, is 95 per cent likely to buy the (dragon) farm in the coming episodes.

Sansa Stark has the best odds of surviving by some margin, with a given death likelihood of just three per cent. Jon Snow is also rated as just 11 per cent likely to die, which - without spoiling anything - may come as a shock to some.

"This project has been a lot of fun for us," said Guy Yachdav, who created the project. "In its daily work, our research group focuses on answering complex biological questions using data mining and machine learning algorithms."

"For this project we used similar techniques," he added. "Only this time the subject matter was a popular TV show. The epic scale of the worlds created by George R R Martin provides an almost endless resource of raw multi-dimensional data. It provided the perfect setting for our class."

"Data mining and machine learning are tools that enable digital medicine to benefit from modern biology for diagnosis, treatment and prevention of disease," summarised TUM's professor of bioinformatics, Burkhardt Rost.

"Turning to such a 'real life' challenge created a didactical jewel, winning students for these subjects, and the interactive visual maps created in the project might open a new approach to data visualization that we will follow up scientifically."