Urban driving is next big challenge for autonomous cars 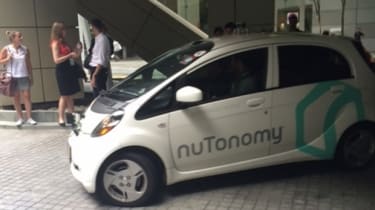 NuTonomy, a start-up spun off from MIT and Singapore-MIT Alliance for Research and Technology (SMART) in 2013, wants to bring a fleet of driverless cars to act as public transport vehicles on the roads of Singapore.

Currently testing its first autonomous vehicle in an area of Singapore known as One North, the company is also working on a second car to add to its future fleet. The hope is that the cars can act as public taxis that help Singapore citizens to travel around the city, but without the cost of employing individual drivers. NuTonomy's vehicles are also electric cars, meaning they produce far lower levels of greenhouse gas emissions.

Many companies have been working on autonomous vehicles, such as Google, Uber and Tesla. Google, Ford, Uber and Lyft recently formed a partnership aiming to speed up the delivery of driverless cars on public roads, and driverless shuttle 'pods' are being tested by Heathrow on London roads.

Doug Parker, COO of nuTonomy, said: "I think there have been a lot of articles about Google and other plays in the space a lot of people have built great offerings for highways, but we think the real challenge is urban driving.

It's incredibly hard to navigate in an uncontrolled area where there's people walking down the streets, cars going in both directions, or construction.

"One of the things we're going to be testing is 'car passing' - one of the hardest things for driverless cars to do is actually decide when to go around another car. This is the thing that all of the autonomous players need to solve."

It was announced in January that nuTonomy had completed a $3.6 million seed funding round and would continue to work in the US as well as Singapore. In both countries, government and industry have been working together in the hopes of bringing the cars to roads in the next few years.

IT Pro was able to experience what a short journey in a nuTonomy vehicle might be like, which you can view in the video here.