Behind the scenes on a British trade mission 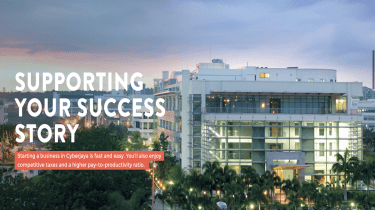 Dean Gifford started to run out of business cards two days into the trip. He'd brought a fresh stack, but all the pitching and networking on the trade mission meant the founder of Preliminal Games (and former IT Pro designer) was constantly doling out cards with two hands, as is the custom in Southeast Asia.

He and his fellow travellers founders and business development staff from ten UK startups had travelled to Malaysia and Singapore to meet with companies, the government, and investors interested in connected cities as part of a trade mission. UK Trade and Investment and Innovate UK had teamed up to lead the mission, offering business advice, support and perhaps most importantly introductions to the collected smart cities startups.

The week-long trip to Southeast Asia isn't a freebie for the startups. The companies pay their own flights and hotels, hoping to get the benefit of government connections, media promotion and the like as they move from city to city having meetings and networking. While it may seem as though the world is smaller thanks to the internet, and that tech-focused companies would be well able to use modern communication tools to make business connections, there remains benefits to meeting in person.

And there were a lot of meetings. The first day of the trade mission was held at Cyberjaya, Malaysia's tech city half an hour from capital Kuala Lumpur, with a host of government officials and tech-focused city planners opening the day with death-by-Powerpoint, explaining the country's plans to be a world leader in smart city technologies.

With the presentations out of the way, it was time for one-on-one meetings between the British companies and potential partners, effectively speed dating for startups. It's a change from the usual pitches the normal process for startups, where they take to the stage for a short time to quickly explain the merits of their idea, hoping to catch the eye of a potential partner, customer, or investor's eye.

Instead, this trade mission favoured one-on-one meetings though not all startups welcomed the change, not least because some local companies took it as an opportunity to pitch their wares or services back to the British companies.

"The change I would've made is to pitch more during the week," said Sonny Masero, chairman of Demand Logic. "Even if it's you know, half an hour before the [rest of the speakers show up], they do two minutes each so the audience could then see the kind of innovation and what we're bringing to the party. Whereas a lot of this week has been actually, being kind of talked to or pitched to by others."

If startups didn't have a chance to speak to someone in the prearranged speed dating, there was always a second chance at the inevitable networking drinks, with a focus on the former rather than the latter, especially in countries such as Malaysia where many of the locals don't drink.

"The networking can be useful because it allowed me to reconnect with some of the people I already knew, and it's quite useful  so people actually remember you, rather than a one-off as part of a bunch of meetings," said Carsten Ronsdorf, head of advisory services at Ordnance Survey, on the trip promoting the long-running firm's consultancy and mapping services.

But don't worry about a lack of drink: these are Brits abroad, and they managed plenty of that after the official networking was finished. If you ever want the chance to network with a British trade mission, find out what hotel the attendees are staying at and hang out in the bar.

Evening beverages weren't simply to relax after a long day of meetings, but a chance to unpick what they did and didn't like about the day, to gossip about who had already! won a contract, and get to know each other better. Indeed, one of the benefits of travelling as a group on such a mission is the startup founders and staff start to look out for one another, helping each other improve pitches and sharing constructive criticism, with the companies even cross promoting each other in meetings.

Hours of meetings and evenings spent networking make for very long days indeed though, particularly for jetlagged travellers. Such was the pattern for the week: get on the coach, arrive mid-afternoon for presentations or official welcomes, chat up some businesses, do a bit of networking, and then decompress with a few drinks with the odd attendee disappearing for private talks they'd arranged themselves, or further discussions with companies they'd met that day. And the next day repeat.

After Cyberjaya, it was a posh coach ride to Johor Bahru, home to huge new city builds, and the signing of a Memorandum of Understanding between UKTI and the local development authority apparently, every trade mission involves a MoU of some sort. From there, another coach ride around city developments in the local area before crossing to Singapore, for "welcome remarks" from the British High Commissioner and more investor meetings and yet more networking. The next day, more PowerPoint presentations from local development firms and government agencies, before more one-to-ones, and more networking.

Embedded on the trip, three aspects of British startup culture were remarkable. First, the capacity to stay out all night networking, and then arriving (mostly) on time ready to work at 8am the next day. Second, the ability to work all day meeting after meeting after meeting without losing their voices or falling asleep, jetlagged, dead on their feet. And third, the skill of working on a laptop on a bus every spare moment on the coach, whether it was ferrying us between countries or merely a short jaunt from the hotel to the high commission, was enough time to pull out the slides and improve the pitch.

If you're a fan of getting enough sleep, don't found your own startup.

But for the rest of the world looking to tap British innovation, it's a good sign, with John Davies, director of technology partnerships at UKT&I, telling the audience in Singapore that British startups have much to offer above and beyond their American rivals. "We don't look to imitate Silicon Valley, we look to take lessons and learnings from Silicon Valley," Davies said, on one hand pushing the UK's strong links with the American tech hub while also saying British firms can offer "valuations without hype" seen in California.

The final day included a crash course in doing business in the region. Smart cities are a key topic in the area because of increasing urbanisation, noted Amelia Grounds, senior associate at Taylor Vinters, pointing out that despite lower incomes and incomes that are often incredibly different between countries the population of Southeast Asia is highly tech literate, well connected, and there's a large emerging middle class. She highlighted some of the differences in doing business locally, aside from handing your business card over with two hands, pointing out that infrastructure is simply not up to the standards we're used to, with cities facing challenges such as heavy traffic. "Trying to have more than two business meetings in one day in Jakarta? Not going to happen."

She also pointed out issues of transparency and corruption. Transparency International rated Singapore better for businesses on that front than even the UK, though Malaysia had less of a positive score, and others in the Southeast Asian area sat near the bottom of the rankings, including Myanmar. Grounds pointed out that while Singapore is governed by the UK bribery act, in other countries you may have to "assess the risks involved" with doing business in more corrupt countries, and take "adequate procedures" to avoid such issues.

"You do have to work with the locals to get things done," noted Jonathan Kok, partner at Taylor Wessing in Singapore.

All of that may sound a lot for a small startup of half a dozen employees to navigate, but the lawyers presenting noted they handily offered services to help companies set up in the area without such troubles once again, those there to pitch were being pitched too, though in this case with so many potential complications on the table, they may not have minded.

It was clear from coach conversations that most of the attendees found Singapore an easier place to do business than Malaysia, but at least a few of the British startups attending said they expected to find themselves flying back into Kuala Lumpur in the future for more talks with potential clients and partners.

And that's the final question: is it worth the effort and cost to take a dozen people across the world to hobnob? Companies on the trip did find interest from local partners, with some signing deals on the spot, and others planning to get back in touch. It's hard to imagine such negotiations happening without the in-person connection. "It's all about relationships," Davies told attendees in Singapore.

Demand Logic's Monsero echoed that. "If we come out here as a company of our own, we may be able to set up a few meetings. But in terms of attracting other as our possible partners or investors, or customers, that would, that would only happen at this scale with help,"

For example, his firm, Demand Logic, is set to partner with CyberView, the developer behind the Cyberjaya project, which is building a new city centre and 14 new properties. "that was the direct result in this mission in term of getting that introduction from, from the networking event UKTI anyway, who were organizing and that wouldn't have happened without this," Monsero said.

Ronsdorf of Ordnance Survey agreed. "You need to be here," he said. "You need to be where your customers are, especially as we have a rather complex proposition compared to a well-defined product like software."

Indeed, here's one small example of the power of in-person networking. Sat in the audience waiting for the next session of talks, the gentleman next to me introduced himself, describing his company which sounded like a perfect match for Gifford's technology, so I pointed out Preliminal in the startup guide.

The two met up, and the former hopes to become the latter's first Singaporean customer. Such is the power of an in-person introduction between two companies who need each other. Thankfully, Gifford thought ahead, and had more business cards printed up.