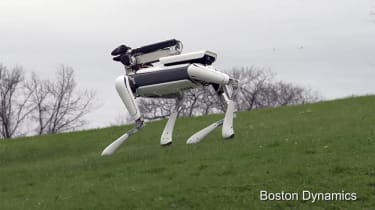 The company released a YouTube video showing off the SpotMini', a quadruped robot roughly the size of a Labrador. Like the company's other bots, it is self-righting and features a mechanical arm for picking up and manipulating objects.

SpotMini is smaller than many of Boston Dynamics' other robots, weighing just under 25kg. It's also one of the quietest ever produced by the company, as it uses an all-electric system, rather than engines and hydraulics.

In contrast to some of Boston Dynamics' other robodogs', SpotMini appears to be designed for domestic tasks; the video shows it loading a glass into a dishwasher and putting a drinks can in the bin.

This is a departure from previous efforts, many of which have been designed for military applications such as goods and munitions transport. However, it shares certain traits with its heavy-duty cousins, such as the ability to right itself.

The video amusingly shows it slipping on a banana peel as it rounds a corner before using its arm to push itself back onto its feet. It also climbs stairs and crouches to pass under a table, demonstrating its ability to navigate household obstacles.

SpotMini lasts 90 minutes on a single charge, and while it "often uses a human for high-level guidance", the video description states that it can function in an autonomous capacity.

It's currently unclear whether Boston Dynamics is designing SpotMini as an overtly consumer product, but the end of the video could give some clue.

It features a SpotMini bot, but rather than being a bare metal endoskeleton with exposed joints and servos, this one is clad in a pristine, futuristic-looking white shell.

This looks much more like something you might see in a hospital or research lab if not necessarily something you'd take home from PC World.