SAM Labs is our start-up of the year. Read on to find out everything you need to know about this worthy winner... 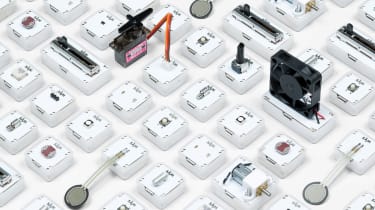 Founded in April 2014, London-based start-up SAM Labs has a simple mission, which is designed to "give everyone the tools and skills to build and shape the future of the Internet of Things".

It has created a set of modular wireless electronics blocks that connect to an app, allowing people of all ages but especially kids to play and create technology. It's a bit like building something out of Lego bricks.

What can you do with the product? Pretty much anything you can imagine! Users have created working doorbells, flags that raise whenever someone tweets at you, tiny robots and, in one case, an internet camera that also involves Lego. The kit could be of use in the education sector where teachers have a hard time in teaching the basics of coding to students. At the time of writing, more than 1,000 schools around the UK have already embraced what SAM Labs has to offer with its modular and easy to use kit.

Users can connect the blocks through an app and set them to perform functions. Logic gates can also be set up to make blocks only active when certain inputs are present. By adding custom code into circuits, users can specify more advanced actions.

"The first event I ever presented the prototypes of SAM at was an HP event with a hardware club. I was just starting the Kickstarter campaign, based on the weird idea I'd had for a prototype that I thought no-one would actually want," said SAM Labs founder Joachim Horn on winning our start-up award.

"But the reception I got at this event was so tremendous that I decided to carry on with the campaign. We were looking for 50,000 in funding and we actually got 125,000."

A successful Kickstarter campaign back in September/October 2014 - which managed to get the backing of Jawbone's co-founder Alexander Asseily among others. Some 817 backers in all to be exact - was just the beginning of SAM Labs' journey. This year, SAM Labs raised an additional 3.2 million from a group of investors, which will allow the company to expand and further develop its products.

So, what does winning the Alphr/IT Pro 01/10/100 award mean to SAM?  "Winning awards is nice as it allows you to have more people on your journey, and shows you that people actually understand what you're doing," added Horn. "That validation means more than you think it does. It's very important."