Just in time for the London Pride Festival, the company launches #prideforeveryone 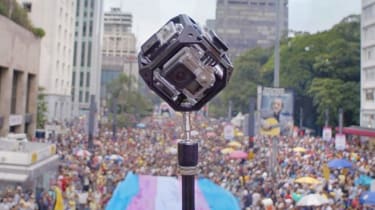 Google has launched a virtual reality experience called #prideforeveryone for individuals around the world unable to physically attend a Pride celebration.

"As LGBTQ rights are challenged around the world, it's more important than ever to send a strong message of support and to stand up for equality and free expression for everyone," said Google in a post about the project. "Let's bring Pride to those who cannot march."

More than half of 1,197 adult LGBTQ individuals surveyed in 2013 had never attended a Pride parade, according to a Pew Research Center study. It's not surprising, considering the continued stigma against the community. In more than 70 countries, it is still a crime to be gay.

Additionally, the recent shooting in an Orlando gay club, which killed 49 people and was the worst mass shooting in US history, has cast a shadow over Pride celebrations around the world. Arjan Dijk, Google's vice president of growth marketing, told USA Today that now more than ever it's important "that people be proud of who they are and who they love."

"Google as a company fully supports that," Dijk continued. "In light of Orlando, it's very important that we celebrate life."

This is not the first time Google has shown support for the LGBTQ community.

"Whether it's taking a stance against discrimination in sport at the Sochi Olympic games, or in being the first company to provide full coverage of transgender employees' healthcare, we have always demonstrated our strong allegiance with the LGBTQ community," the company stated on its blog.

The Pride VR experience can be viewed through a VR headset, including Google Cardboard, or can simply be viewed on YouTube. Drag the screen around to get the full 360-experience.