Man claims he invented the device back in 1992 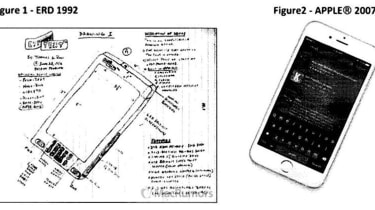 A Florida man is suing Apple for $10 billion (13.4 billion) claiming he invented the Apple iPhone, iPad and iPod over 25 years ago.

Thomas Ross said that the devices infringe a patent filed at the US Patent Office (USPO) 15 years before Apple unveiled the iPhone. The patent in question is for an "electronic reading device". He also offered up three hand-drawn technical diagrams of the device that he imagined would be used in reading and writing.

The drawings include schematics that include dual rectangular panels with a touchscreen, cellular connectivity, internal and external storage and photo and video browsing.

In addition to the $10 billion claim, Ross is also looking for a 1.5 per cent royalty on the offending products.

In a filing with the court, it was said that "What Ross contemplated, was a device that could allow one to read stories, novels, news articles, as well as look at pictures, watch video presentations, or even movies, on a flat touch-screen that was back-lit.

"He further imagined that it could include communication functions, such as a phone and a modem, input/output capability, so as to allow the user to write notes, and be capable of storing reading and writing material utilizing internal and external storage media. He also imagined that the device would have batteries and even be equipped with solar panels."