The car was going nine miles over the limit, according to Tesla's data 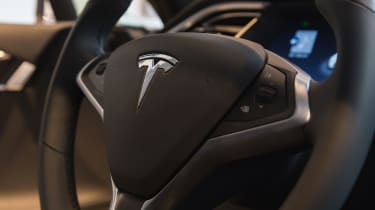 The US National Transportation Safety Board (NTSB) has issued its first preliminary report into the fatal crash of a Tesla Model S last May.

The organisation found that the car - whose driver was killed in the incident - was travelling nine miles over the speed limit at the time of impact.

"Tesla system performance data downloaded from the car indicated that vehicle speed just prior to impact was 74 mph," the report read, adding that the car's Autopilot function was active at the time of the crash.

"The car was also equipped with automatic emergency braking that is designed to automatically apply the brakes to reduce the severity of or assist in avoiding frontal collisions."

The car collided with an articulated lorry as it pulled out onto the highway. The first photos of the crash have been included with the report, and show that the Tesla almost passed under the truck, before impacting the underside of the trailer and almost taking the whole roof off.

The NTSB has not given a probable cause for the crash, and has said that "all aspects of the crash remain under investigation". Tesla has not yet responded to the new report, but previously explained why the automatic brakes failed to activate.

"Neither Autopilot nor the driver noticed the white side of the tractor trailer against a brightly lit sky," the company stated in an official blog post, "so the brake was not applied."

The Autopilot feature was turned off in a Tesla Model X that crashed in Pennsylvania on 1 July, Tesla chief executive Elon Musk said on Twittertoday.

With information from the vehicle's logs, the company has been able to determine that the feature was not enabled when the accident occurred, and that it "would not have occurred" if it had been on at the time, reports CNN. The driver survived.

A Tesla spokeswoman told IT Pro: "There was a crash and as we do with all crash events we reached out to the customer to make sure they were okay and we were unable to contact him, but we have since been able to reach him, which is why Elon released a statement on Twitter."

The crash is separate to another involving a Model X near Montana, which the driver survived, and which occurred after the driver did not respond to alerts telling him to put his hands on the wheel.

The company has been widely criticised in light of the crash and related incidents, such as another accident involving a Tesla Model S that resulted in the death of the driver.

Joshua D. Brown, 40, from Canton, Ohiowas killed on 7 May when the Autopilot feature on his Model S did not distinguish between an oncoming vehicle and the sky.

In response to the crashes, Musk said: "We don't mind taking the heat for customer safety. It is the right thing to do."

Tesla has admitted its Autopilot feature was engaged when one of its cars crashed in Montana on the weekend.

But the car manufacturer added that the driver did not respond to alerts telling him to put his hands on the wheel.

While the driver survived, a separate Tesla Model S crash in Florida resulted in the driver dying, when the Autopilot did not distinguish between an oncoming vehicle and the sky.

Speaking about the Model X accident, a Tesla spokeswoman told IT Pro: "The data suggests that the driver's hands were not on the steering wheel, as no force was detected on the steering wheel for over 2 minutes after autosteer was engaged (even a very small amount of force, such as one hand resting on the wheel, will be detected).

"This is contrary to the terms of use that are agreed to when enabling the feature and the notification presented in the instrument cluster each time it is activated."

She continued: "As road conditions became increasingly uncertain, the vehicle again alerted the driver to put his hands on the wheel. He did not do so and shortly thereafter the vehicle collided with a post on the edge of the roadway."

A spokesman had previously said that there was no reason to assume that the autopilot feature had anything to do with the crash.

Tesla chief executive Elon Musk has said there are no plans to disable the autopilot feature. He did, however, tell theWall Street Journalabout plans for a blog post highlighting how drivers should use the technology in future.

In a tweet, Musk said: "We don't mind taking the heat for customer safety. It is the right thing to do."

The spokeswoman added: "Autosteer, which is enabled via the Driver Assistance tab under Settings, is best suited either for highways with a center divider. We specifically advise against its use at high speeds on undivided roads.

"That said, provided the driver remains alert, it will still be safer than a person driving unaided, as people are sometimes distracted or may become unable to operate the vehicle, due to falling sleep, fainting or experiencing a medical emergency. After either high lateral acceleration from a sharp corner is detected or there is no force on the steering wheel, the vehicle gradually reduces speed, stops and turns on the emergency lights."

Following the incidents, Tesla's use of the autopilot function in its cars is being investigated by the US Securities and Exchange Commission, which is also investigating why Tesla took 54 days to publicly report that there had been a fatality in the Model S crash.

Elon Musk has hinted that he will be unveiling the second part of his "Top Secret Tesla Masterplan" later this week.

The eccentric tech billionaire has had a difficult couple of weeks, after the Tesla range's self-driving 'autopilot' mode was linked to at least one fatal crash.

On 7 May, the driver of a Tesla Model S was killed in Florida while the car was in Autopilot mode, an incident that is currently being investigated by the National Highway Traffic Safety Administration (NHTSA).

A Tesla Model X crash in Pennsylvania is also being investigated by the NHTSA, although the collision was not fatal, and it is not currently known whether Autopilot was engaged.

"Based on the information we have now, we have no reason to believe that Autopilot had anything to do with this accident," the company said in a statement to news organisations.

Exactly what Musk's "masterplan" consists of is yet to be revealed, but some suggest it relates to Tesla's proposed acquisition of renewable energy company SolarCity, of which Musk is chairman and principal shareholder.

Musk appeared to lend considerable weight to these rumours, when he tweeted that "a seamlessly integrated Tesla battery & solar power product that looks beautiful" is the reason he is pushing for a merger.

In addition to producing cars, Tesla is also working on standalone battery technology, which could be used to capture and store excess solar power that otherwise goes to waste while homeowners are at school or work.

A second road traffic incident involving a Tesla self-driving car is being investigated by police, after it appears the vehicle's Autopilot feature failed.

Although the crash was not as serious as a fatal collision in May that was revealed last week, it has still raised questions about whether the feature is safe or not.

According to news sources, the Tesla Model X hit a guard rail and bounced into a concrete barrier, flipping onto its roof in the process.

Authorities have said that although the Autopilot feature is not necessarily to blame, it will be looked at during the course of their investigation.

The driver of the car and his passenger were both hospitalised for their injuries, but it no third party is thought to have been hurt and it was the only vehicle involved.

Tesla said in a statement: "Based on the information we have now, we have no reason to believe that Autopilot had anything to do with this accident."

The company received information following the road traffic incident saying the air bags had deployed, but the logs did not reveal whether controls had been taken over, giving them little insight into whether Autopilot had been activated or not.

Tesla's Autopilot feature allows the car to change lanes automatically and react to changes in traffic ahead, such as slowing to avoid obstacles.

A man using Tesla Motors' semi-autonomous vehicle has been killed in a crash, after cameras inside the Tesla Model S failed to distinguish between a turning lorry and the sky.

Joshua D. Brown, 40, from Canton, Ohio died in the accident on May 7 when the brakes of the semi-autonomous car he was driving did not automatically activate. Brown did not manually activate the brakes either, said Tesla.

The company said in a blog post: "We learned yesterday evening that NHTSA is opening a preliminary evaluation into the performance of Autopilot during a recent fatal crash that occurred in a Model S.

"What we know is that the vehicle was on a divided highway with Autopilot engaged when a tractor trailer drove across the highway perpendicular to the Model S. Neither Autopilot nor the driver noticed the white side of the tractor trailer against a brightly lit sky, so the brake was not applied."

It added: "The customer who died in this crash had a loving family and we are beyond saddened by their loss. He was a friend to Tesla and the broader EV community, a person who spent his life focused on innovation and the promise of technology and who believed strongly in Tesla's mission. We would like to extend our deepest sympathies to his family and friends."

The car passed under the second vehicle, which impacted the Model S' windshield. Tesla said in the statement that, had the Tesla hit the rear of the trailer, even at high speed, the crash safety system would have activated to prevent serious injury.

"As more real-world miles accumulate and the software logic accounts for increasingly rare events, the probability of injury will keep decreasing. Autopilot is getting better all the time, but it is not perfect and still requires the driver to remain alert. Nonetheless, when used in conjunction with driver oversight, the data is unequivocal that Autopilot reduces driver workload and results in a statistically significant improvement in safety when compared to purely manual driving."

The UK government announced in March that it was aiming to have autonomous vehicles cleared for roads by 2020, with trials beginning from 2017. Uber began testing driverless cars in Pittsburgh, US in May.

Google recently patented 'sticky cars' in order to minimise accidents by gluing people they hit to the car bonnet, and engineers are working on training the vehicles when to honk at other drivers.