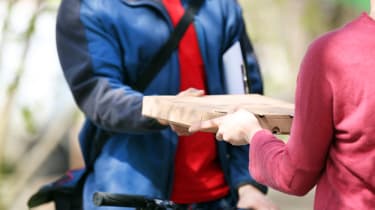 Takeaway food ordering service Just Eat has announced that delivery robots will soon be hitting the streets of London to deliver orders from a limited selection of restaurants.

The company is partnering with Starship Technologies, makers of slow-moving pavement droids, to trial the self-driving, six-wheeled robots. Using a GPS signal and nine cameras to navigate and avoid obstacles, the droids can travel up to 4 mph for roughly 10 miles, reports The Telegraph. They also come with movement sensors that send an alert if they are lifted off the ground.

The robots can carry a maximum of 10 kilograms and are designed by Starship to transport packages, groceries and takeaway meals to consumers within a short radius of their point of origin. Customers receive a notification on their phone that says a robot is on its way and a code to unlock the automated courier.

"This is another example of how we are pushing technology boundaries to provide our customers and restaurant partners with more choice and flexibility," said Fernando Fanton, chief product and technology officer at Just Eat. "We've always been committed to offering our customers new ways to order and pay for their food and now we're right at the heart of a new way of delivering food which is as exciting for us as it will be for those who find a robot on their doorstep."

In addition to teaming up with Just Eat, Starship is also partnering with German package delivery firm Hermes, German retailer Metro Group, and London food startup Pronto.co.uk. to deploy dozens of delivery robots in London, Dsseldorf and Bern, as well as another "large German city," before moving to several other European and American cities.

"By launching partnerships with major companies we will enter the next phase in our development. While Starship has been testing the robots in 12 countries in the last nine months, we will now develop know-how on running real robotic delivery services," said Ahti Heinla, co-founder, CEO and CTO of Starship Technologies, in a statement to Wired.

Although drone-based delivery systems such as Amazon Prime Air have started to be developed in recent years, Heinla said he expects land-based robots to beat drone delivery technology to the market.

"While I believe drones will have their place there are still lots of unanswered questions around [them]," he said at the Wired Retail event last November, citing safety, regulation and people's fear of drones as major obstacles.

Just Eat and Starship Technologies' testing programme will begin within the next few months. Further details of the restaurants taking part in the trial will be announced shortly.