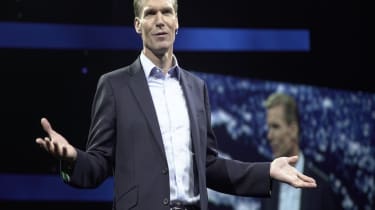 Speaking at Sage Summit 2016 in Chicago, Kelly told 15000 of Sage's customers: "Watch the news. It's all big business. Look at global financial summits like Davos hundreds of privileged old men jumping on private jets to glamorous resorts where they pontificate and nothing changes. And where are you guys? Shut out.

"Not on the agenda, not on the ski slopes back home running your business, working flat out. The issues holding our customers back about are pretty much the same around the world. It's about red tape, bureaucracy, stupid legislation, outdated taxes, finding the right talent and skills. And the fuel of growth, cash flow," he continued.

"We don't need outdated global gatherings of big business lobby groups and policy makers. We need real reform on these issues that hold you back and burden your business. We want to use our voice to get you that reform."

Earlier this year Kelly accepted an invitation from former Prime Minister, David Cameron, to act as his business ambassador on the proviso that he could also act as a representative of SMBs.

In the US, the exec said Sage had taken the temperature of entrepreneurs "and found that over half of you are dissatisfied with the current political landscape. You used words like disgusted. Discouraged. Disappointed."

He said the company will be calling presidential candidates Donald Trump and Hilary Clinton to account to help small businesses, as well as running a series of event in the US to help businesses understand what both the Democrats and Republicans will do for Sage's customers.